An Open Letter to Fairfax County Public Library Board of Trustees; Or, "What now?" 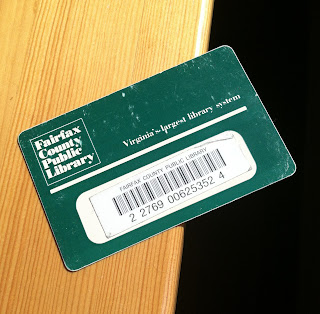 [[Note: this letter was also sent via email to libraryboard@fairfaxcounty.gov.]]

First: Thank you. You are volunteers, appointed because our elected officials respect your judgment and your history of action. You serve the Fairfax County Public Library system, which spans nine districts, in an age when we all feel over-scheduled. Your time is valuable, and we thank you for it.

Recently, the Board has received a great deal of criticism for actions pertaining to the Library's new organization model. In August, Mary Vavrina, vice president of The Friends of the Tysons-Pimmit Regional Library, wrote an essay decrying potential outcomes of the implementation of the "Beta Project"--including staff reductions that would eliminate children/youth services librarians, and no longer require any employee to hold a Masters of Library Science (MLS) Degree. This week, the Washington Post described the creation of the "floating collection," ending the assignment of books to specific branches, as well as the mass disposal of what may have been as many as 250,000 books. Public response was immediate and fierce, and at a crowded September 11 Board meeting, you opted to reconsider your strategic plan.

As the author of three books, with a fourth forthcoming, I'm invested in your decision. More importantly, I still carry my Fairfax County Public Library card. My family still lives in Vienna. I spent long hours reading while curled up in a beanbag chair at the Tysons-Pimmit Regional Library, from Beverly Cleary to Stephen King. In the summer, I checked out books 50 at a time. I got a sticker or a stamp for every book I read in July. Remember the guinea pig you used to keep in a big fish tank by the windows? I do. I read my first issue of The New Yorker in your periodicals section. Your shelves are where I found my very first copy of Poet's Market, and dreamed of where I might publish someday.

I once wrote for W.W. Norton about my love of public libraries, articulating the community values they entrench. For many children, a library card is their first experience with the social contract: e.g., shared possession of an item they must be trusted not to mangle or lose. Seeing a book that is particularly well-thumbed connects us with the scores of people who chose it before us; we browse not only with our eyes, but with our hands. The matrices of the Dewey Decimal system orders books in a way that is both logical (by category of topic) and arbitrary (by letter of last name), creating powerful juxtapositions; we discover new authors by fate, by chance, by feel.

You'll notice that everything I mention above emphasizes the physical presence of the book. But in your strategic plan (which I read, twice), here's what's missing: the books. The word "book" appears an average of less than once per page. In your conclusion passage, "Moving Forward," the word appears only in this context: "Libraries are changing, the library profession is changing, and the very definition of a 'book' is changing." Hmmm. Though throwing away thousands of books may not have been explicitly mandated in the strategic plan, there's no denying that it's an organic outcome of the plan's priorities.

Funny how this is how that same paragraph ends: "We all need to be on the same page in order to move forward together." Though this plan devalues books over and over in favor of "information," it can't resist using the symbolic rhetoric of the artifact. Even in this age, the book is powerful. You've got to give us a plan that recognizes that.

I've served on boards. I've read a lot of strategic plans. When I see illustrations like this one, on page 18: 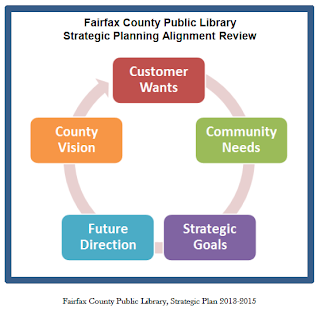 ...I see a generic plan, devoid of attention to what library should do. I see the word "customer" and shiver. Though I admire how libraries have absorbed the role of a traditional neighborhood rec centers in recent decades, let's be clear: FCPL is charged with cultivating readers, not customers. Tying community functions to literacy and the dissemination of the written word should be at the core of what FCPL does. Someone's coming in for a flu shot? Your job is to make sure they read the pamphlet.

I remember gathering with other kids to watch Misty on VHS at the library in a darkened side-room, peeking through my fingers during the scary parts where I worried the horse might die. Yes, I was there to see a movie on a June day, but the librarian used the subsequent discussion afterwards to steer us toward Marguerite Henry's novel, Misty of Chincoteague, which I then read. Same with Black Beauty. That's the "extra step" that strategic plans exist to ensure, so each activity or expenditure ultimately fulfill one's mission. Yeah, the arc of planning those hours is more work-intensive than popping in Battleship. But if you cultivate smart, motivated staff--rather than driving away those with higher degrees--you'll see such programs happen.

In recent years, libraries have become a prized resource for wireless internet and eBooks. I don't object to that, particularly in the spirit of free access to information for all. But I notice that in diagrams such as this one, on page 10, under "Cornerstones and Guiding Statements": 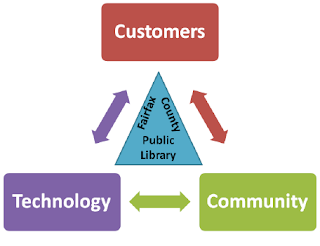 ...a corrosive distinction is being made between books, viewed as the library's past, and the library's future. Books are a form of technology. If you don't believe me, ask Johannes Gutenberg; ask Tan Lin. I don't argue with the observation that books have drawbacks compared to other modes of access to creative and scholarly work. But books have unique advantages, too. Books are not a defunct precursor to "technology." Scrub that thought from this plan, please.

One of the sore points of discussion has been that the Fairfax County Public Libraries have gathered insufficient feedback from their constituents. I am sympathetic to the frustration of having little attendance at the town hall meetings that were held. But I'm wary of the proposed means of future feedback, e.g. the 900 respondents also volunteered to become FCPL Customer Advisors by "providing input to online queries three to four times each year." Not everyone is comfortable with the format of receiving and responding to online queries. That's the realm of the tech-savvy. Has anyone noted the inherent bias that will enter the data, if there isn't a counterbalancing survey of people via hard copy written forms?

When I called my mother to share my distress over the news of recent FCPL trends, she put it best. All the emphasis is on cultivating people's connection with a screen, she said. Instead of our connections with each other.

I realize that there is a certain beleaguered mindset at work. Funding cuts have been merciless. As evidenced in the strategic plan: "In FY 2011 Fairfax County faced a budget shortfall of $257 million and the library’s budget was reduced an additional 6 percent. Additional staff were lost and operating hours reduced again by 9 percent." Yet the plan goes on to declare, "With a more stable budget outlook, the focus has shifted from survival, to becoming as vital to the lives of Fairfax County residents as possible."

That's wonderful. That also means that you're committing to a higher standard to engagement between librarians and readers. I'm concerned that in asking every staffer to be fluent in all on-site duties--from opening and closing, to check-out, to web guidance, to reference database searches, to recommending titles from the children's section and adult thrillers alike--you're squeezing out the dedicated talent that makes for great service. The conversations people remember from visiting their library come from vibrant, learned recommendations by people with areas of expertise. Specialization is not a bad thing.

I'm not a nostalgist. Much as I could wax poetic about the days of chatting with the librarian as she stamped the card in the back of my latest Encyclopedia Brown or Hercule Poirot title, I accept the expediency of putting scannable codes on the spines, and of self-checkout options. Change is good, and normal. But in response to the question of "Why does FCPL exist?," the current strategic plan's answer--to “educate, enrich and empower our diverse community”--is boilerplate jargon. Perhaps “to provide books, storytime programs and Internet access” insufficiently describes what the library does, while the larger list that includes "a clean, safe space" and "an app for handheld devices" is overwhelming. But don't throw out the baby with the bathwater. Your mission is in the spirit of that litany.

I live in DC now, and so in a sense I am commenting as an outsider. But my connection to home is strong. Growing up where I did was a privilege (for all the reasons celebrated on page 8 of that strategic plan). I became a writer because of Fairfax County, and I want others to have that opportunity. Your public library system has every potential to stand out on the national landscape, and you have received a mandate from your constituency to make that happen. Start with a new strategy. In Latin, liber as an adjective means "free." As a noun, "child." Romans used the word to describe the bark of a tree--and therefore, for "book." Could there be any more perfect constellation of meanings? 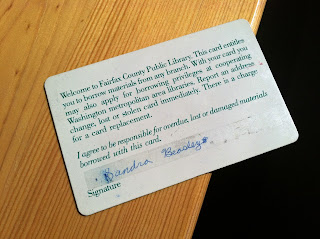 This reminded me of the scary libraries in California - I went in and could find no books, only screens and DVDs; when I asked about books, the librarian literally looked at me blankly. Bleak.
I am happy to say that Redmond, a technology-0bsessed town, has plenty of real-life books at their library, along with screens and DVDs and such. And I hope it stays that way.

Great letter! It should be published on the op-ed page of the Post.

I am a public library director. Well said.

"...when I asked about books, the librarian literally looked at me blankly."

Maureen, chances are good the "librarian" you spoke to was not a librarian, at all. Increasingly, professional librarian staff--librarians--are being replaced with paraprofessional or clerk staff who are woefully unprepared to properly assist library users. At the same time, many librarians are working in other job classificationat lower pay grades because library systems are increasingly reducing the number of librarian positions.

Thank you for such an articulate, intelligent and thoroughly meaningful letter. Spot on!

Just beautiful, Sandra. I hope many people read your post, especially those who are responsible for the lack of funding for this precious community resource.