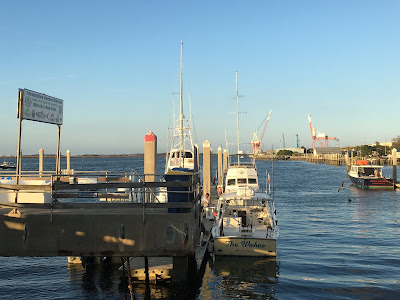 Remember when a blog post would just be a round-up of whatever one happened to be experiencing at the moment? I miss those "everything and the kitchen sink" posts. They're a big part of why I still feel so close to a cohort of poets who came up together, posting to blogs en route to their first and second books, in the mid-2000s. So here are the odds, the ends, and (as a nod to the holiday) the giblets.

Mayor Bowser has forged a truce with the DC Commission on the Arts and Humanities in regards to the Art Bank. But it remains to be seen if the newly minted "Creative Affairs Office" will try to take up what has traditionally been DCCAH responsibilities, and DC is approaching the end of 2019 with still no poet laureate. That makes me sad.

Our Thanksgiving break started off with a drive as far as Savannah, stopping off with my husband's old friends--a photographer and a plant designer who does work for Mashama Bailey. We had good food at The Grey Market, the chef's new lunch-counter spot, which serves okra-tomato stew and hand-bottled Bloody Marys. We bought a pack of Benton's bacon to fix in Jacksonville, and a bag of Sea Island red peas for a January 1 hoppin' John. 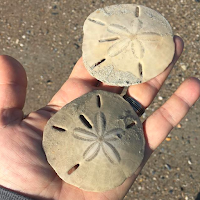 Our week on Amelia Island has been quiet. A long walk by the sea, during which we found four perfectly whole sand dollars. A day trip to see Jacksonville's museums, the MOCA collection and the Cummer, which had a special exhibition of Tiffany glass. Thanksgiving with four generations of Taylors. A trip to Fernandina Beach, which included taking a chance on a junk shop that turned out to have a treasure trove of stuff--including unopened packs of Garbage Pail Kids cards, circa 1987, complete with the stick of gum inside. We sat down to the bar of Peppers and ordered a round of mezcal just in time to see UVA beat VA Tech in a reasonably epic football game. Then we walked down to the water and watched the pelicans feed off the scraps cast off by fisherman, cleaning their day's catch.

This is the most intense academic fall of my past five years, which is saying something: I've taught in five different spaces in the past three months. But the method behind that madness is always being open to new modes, new audiences. The dark horse that turned out to be a delight was a four-week online course for 24 Pearl Street, which drew on my growing interest in "Essaying in Unconventional Forms"; they use a Blogger platform not unlike this one. The quality of the student work and the ability to organize my time caused me to turn around and immediately pitch a class for the new year. This one will be "Mapping Your Memoir from Start to Finish," and it'll run for eight weeks rather than four. The details are here. I'm really excited about it.

I need a new official author photo. I'm not wearing an engagement or wedding ring in the one that gets used now, taken in 2011, which Milly West was kind enough to grant permission for me to use in tandem with publishing Count the Waves in 2015. I hadn't met my future husband yet; you can't tell by looking at the photo, but I can. I'm ready for a photo that shows off the silver streak in my hair. 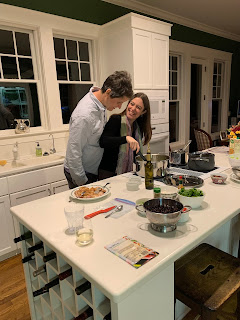 Will we ever go somewhere "on vacation" that isn't tied to a residency or a conference? That's a legitimate question for a two-artist household with no kids. I'm used to working, even when the ostensible mission is to relax, and on a family trip like this one that transforms into cooking dinners for all. So far I've made a pearled couscous pilaf, several salads, fruit curry, and posole verde with tons of green pepper, savoy cabbage, and cilantro, plus a side of black beans with radish greens. My prep generates far too many bowls to be cleaned, a glut of mise en place, but I'm soothed by the process of chopping and sorting. Fortunately my in-laws seem to enjoy the results, and they're patient when a pot of broth unexpectedly takes an extra twenty minutes to come to a boil. In anticipation of making posole, we packed a can of hominy from home, but I'd forgotten just how many ingredients there were to be assembled. My husband saved the day when he found tomatillos at a local supermarket.

My friend Leslie Holt makes amazing art centered on disability, and she just opened an online shop to support her "Neuro Blooms" project. Check it out here.

A few years back, I met someone whose profession involved maximizing impact across social media platforms. He'd taken a particular interest in poets and so when I introduced myself, he immediately observed, familiar with my handles--oh, yeah, you're a "burst" person. Apparently that refers to my tendency to post to Twitter seven times in one day, but then go quiet for two weeks; or the way that I post long, substantive posts to this blog of unique content, but I only post them once a month. I suspect that's one of the patterns where return on investment is lowest, but it's what feels right (or at least necessary) for now.

John Churchill has passed away. He was my first boss, and he seemed eternally youthful. Not the most auspicious "how I got my first job story," but: I turned up to my spring 2002 Phi Beta Kappa induction at the University of Virginia an hour late, because the clocks had spring forward that morning. John, the newly minted Secretary of national headquarters, was making the rounds to every chapter in the country to lead ceremonies in person. I was so apoplectic with apology that I offered to volunteer time to PBK in the coming year, when I'd be back at home and attending graduate school at American University. I knew they'd just begun offering a poetry award, and I thought they might need help running it.

That turned into an internship, which became the job of Awards Administrator--not just the poetry award, soon defunct, but book awards for writing about humanities, sciences, and literary criticism; a fellowship in philosophy; a scholarship in Greek studies. When John's executive assistant was on maternity leave, I sat at her desk. When the PBK Senate met, I took elaborate meeting minutes that were later, he told me, entirely too editorial for public use (though greatly entertaining on initial read). He modeled a genuine love for the liberal arts that was inspiring, and he made sure The American Scholar got the funding it needed. He was a gentle soul with a big laugh. Nonprofits are odd, often highly stratified places to work, where the shadow of fundraising needs looms constantly. Later, I'd look back and realize that creating a humane environment, under those circumstances, was no small feat.

My MFA program's literary journalism class required an extensive interview-turned-profile. I asked John to sit and talk with me, which he did, his Arkansas drawl unfurling over a Bass ale that he nursed for two hours. My questions were...boring, polite, perhaps overly mindful that he was my boss. I wish I could re-do that interview. I'd ask about traveling to Oxford. I'd ask how to make great pickled okra. 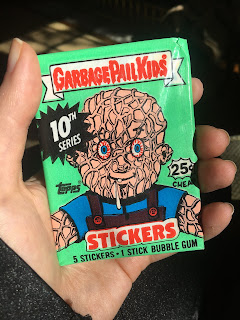 In Fernandina Beach, we took a place on a junk shop that turned out to have box after box of sealed collectible cards from the 1980s and 1990s. I couldn't resist a pack of Garbage Pail Kids. I carefully pried open the wax packet, originally priced at 25 cents, complete with stick of gum. They are just as beautifully horrible as I remembered. 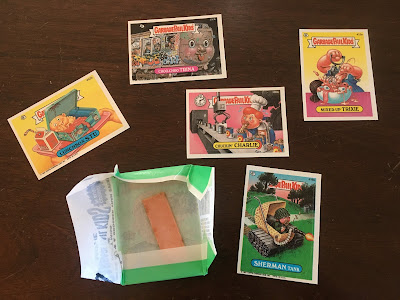