Looking through magazines put out in February is quite surreal now--pages of calendar listings for summer performances, conferences, and art exhibits that we now know to be cancelled or drastically altered. But if there's one thing I can't justify on the flip side of these stay-at-home weeks, it is a stack of unread periodicals. So yesterday morning, I picked up the latest Poets & Writers and settled in with coffee. This is actually a great issue: compelling profiles of a quartet of accomplished women writers--Natalie Diaz, Emily St. John Mandel, Monica Sok, and Bethanne Patrick--plus an insider look at the National Park Service retreats, which I've always wondered about. 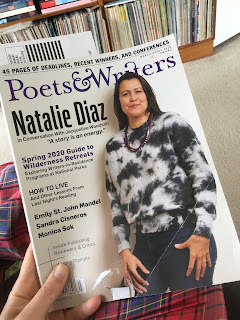 I got about half-way in and thought, Oh! Katrina Vandenberg! The essay is "Seeds of Change: What a Summer Writers Conference Can (and Cannot) Do For You." I was with Katrina at the Sewanee Writers' Conference. We haven't stayed in close contact. But I regularly use her craft essay, "Putting Your Poetry in Order: The Mix-Tape Strategy," in my classes. 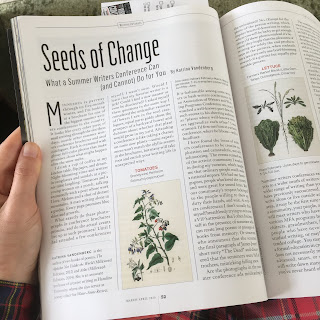 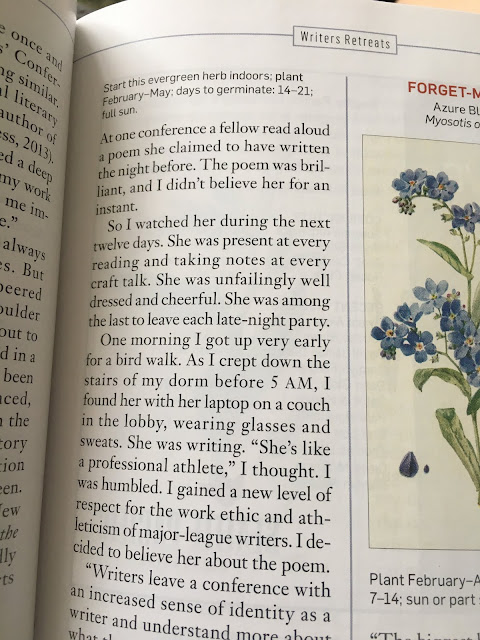 The text, in case you can't access the image:

"At one conference a fellow read aloud a poem she claimed to have written the night before. The poem was brilliant, and I didn't believe her for an instant.
So I watched her during the next twelve days. She was present at every reading and taking notes at every craft talk. She was unfailingly well dressed and cheerful. She was among the last to leave each late-night party.
One morning I got up very early for a bird walk. As I crept down the stairs of my arm before 5 AM, I found her with her laptop on a couch in the lobby, wearing glasses and sweats. She was writing. 'She's like a professional athlete,' I thought. I was humbled. I gained a new level of respect for the work ethic and athleticism of major-league writers. I decided to believe her about the poem."

This is such a generous portrait that I'm hesitant to claim it, especially since there's no way in which I'm like a professional athlete. That said...this is about me! And a quick email to Katrina confirmed my suspicion.

I would have been wearing pajamas, not sweats. I got in the habit of wearing pajamas when I lived on the Lawn at UVA (a year that required trekking outside to use a communal bathroom). I've always been a night owl, and I was on deadline to Black Warrior Review for a chapbook manuscript that was supposed close to being ready and which, secretly, I had not written yet. I don't know about being ever-cheerful. On one hand, I was thrilled by the recent publication of my debut; on the other hand I'd been told by the distinguished mentor assigned to me for the conference that my new work didn't interest her much, so much so that she had no feedback to offer. I didn't know what to make of that.

What saved me were the fellow fellows. I loved their camaraderie, their kindness, drinking and laughing into the late hours. I'd never been around so many writers in the prime of their creativity. And yes, sometimes on top of those late hours I would add later hours of drafting.

This was the summer that I fell in love with the sestina: it's gyroscopic energy, the requisite problem-solving. The poem that Katrina is referring to is "Let Me Count the Waves," which uses an epigraph from Donald Revell. I was intrigued by the possibility that if I used "face" as one of the endwords, and "butt" as another, the collision necessitated by the closing envoi would invite me to address someone as "buttface" (sorry, Mr. Revell, I was strictly motivated by technical opportunity). What really fueled the poem was thinking about the ways my age and femininity--my skirts, my shawls--were affecting the lens through which my work was being viewed, even while attempting a bravado of form. I printed out a draft on the cheap but sturdy Hewlett-Packard I'd lugged down in my trunk from DC, and slipped a folded copy to Claudia Emerson for her to read before anyone else. By the time we sat down to the dinner table that night, I'd ramped up my confidence (aided by a prod from Eric McHenry) to share the poem aloud.

Ironically, it would be the one sestina that the BWR editors didn't accept for inclusion in the chapbook, which was published as "Bitch and Brew: Sestinas" later that year. In 2009, Poetry took it instead. In 2015, that poem lent its title to my third collection. I wasn't just drafting a sestina: I was navigating toward the next phase of my career. What a strange gift that Katrina happened to witness it, as part of an early morning's pursuit of birds.

Anyway, all of this is just to be thankful for the generosity shown here. Like most writers, I'm prone to doubt and slippage in my sense of self. I don't think I'm "major league," but it's nice to be reminded that, dammit, I'm still taking my chance at bat.
Posted by Sandra at 3:36 PM 10 comments: