5 AM Thoughts, North Carolina (& Back Again)

*Before I forget: I am hosting a kickass fiction event at the Arts Club of Washington this Wednesday (October 9; full description here) with novelists Mary Kay Zuravleff and Lisa Gorman, and journalist Judith Warner. Please come if you're in DC! And if you're in New York, perhaps I'll see you at the Center for Book Arts reading this Friday (October 11). It'll be my first chance to hold this brand-new chapbook... 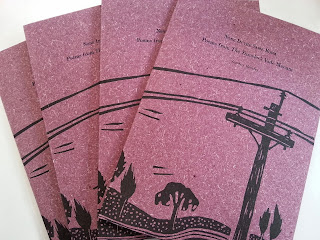 A confession: I was going to to write here about Miley Cyrus and the anguish-porn of talented twenty-something girls. (The ambiguity of "of," because that is something both put upon them and championed within.) I took screen caps from the "Wrecking Ball" video and everything. But that story is moving too fast. Anything I write today might be contradicted tomorrow. I'm keeping an eye on it.

Also: I'm going to devote a post to this in the future, but for now I want to share the news that I've joined the faculty of the University of Tampa's low-residency MFA program (which, thankfully, I can do from D.C.). I'm taking the leap because my experiences at the Writer's Center and elsewhere have been deeply rewarding--but there's such a great opportunity to develop a philosophy of craft that works best with a serious, longterm commitment from students. If you're interested in hearing more, and would even consider enrolling in the program, feel free to email me. We will not talk about Miley Cyrus, I promise. Unless you specifically request it.

The other week, we drove down to Raleigh, NC, for the annual International Bluegrass Music Association award show. It was a stunning three days of music. Tony Rice was inducted into the Hall of Fame, which was important for all kinds of reasons to be elaborated on at a later date. I attended a live WAMU recording, which gave me a bit of hometown pride. I got to hear Frank Solivan & Dirty Kitchen; congrats to Mike Munford, their banjoist, for his IBMA award. If you're ever looking for a great night out in Raleigh, next door to The Pour House Music Hall is Bida Manda, an authentic Laotian restaurant. We managed to snag the last two seats at the bar for dinner one night and I had the Mee Ka Tee, a pork belly & rice noodle soup, which was just as indulgent as you would imagine. 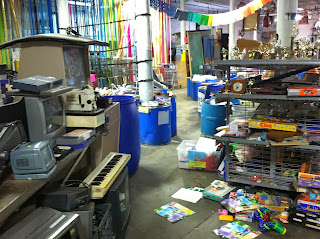 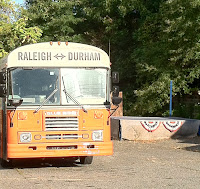 We trekked over to Durham, which I'd never visited before. The Scrap Exchange is an amazing nonprofit "creative reuse center," a warehouse space filled with wallpaper remnants, plastic bits, feathers, discarded TVs and radios, boxes, yarns--all the quality junk that can inspire an artist, priced to be bought with the coins out of your pocket. Later, along Duke's college corner, my love shopped for records and I shopped for dresses; we both found something that suited us, then headed to Geer Street Garden for dinner, and from there to a friend's art opening in Chapel Hill. I'm hoping to get back to do a reading at The Regulator Bookshop with Count the Waves. While there I bought a copy of Scott McClanahan's Crapalachia: A Biography of Place, and when I introduced myself to the bookseller he turned out to be the son of author John Dufresne. The day just had that kind of serendipity to it.

Our last afternoon in town we explored the North Carolina Museum of Art. Wow. Though I loved Hickory, this was the more revelatory trip in terms of North Carolina's contemporary, edgier sensibilities. 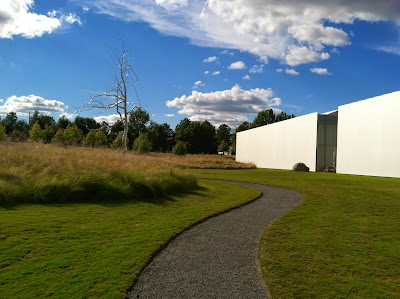 Every nook was an opportunity for sculpture; we almost missed the Rodin garden. 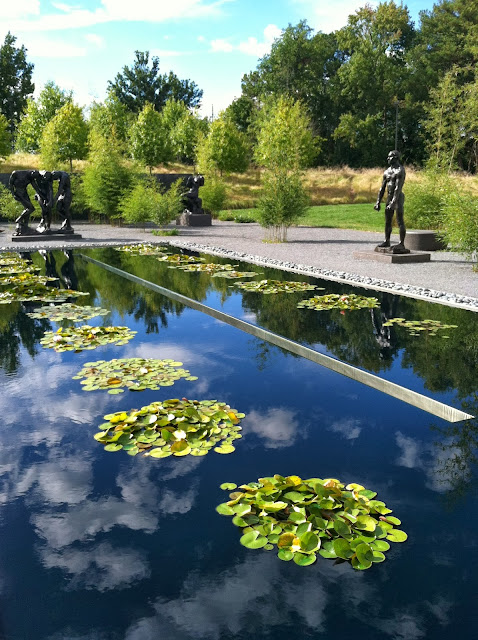 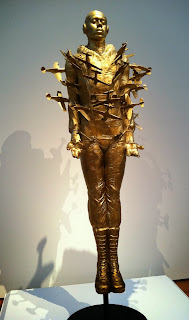 Inside the museum, there were intriguing works by everyone from Joseph Cornell to Kehinde Wiley. The sculpture Tar Baby vs. Saint Sebastian, by Michael Richard, would have been mesmerizing by any standard in its tribute to the Tuskegee Airmen. But the image--cast from the artist's body--is especially haunting knowing that he was killed while in his New York studio, located on the 92nd floor of World Trade Center's Tower One, on September 11, 2001.

Beyond the museum is a sprawling park, which houses many more large-scale artworks. There was a nice mix of seclusion and open expanse. We hunkered down in Chris Drury's "Cloud Champber for the Trees and Sky." Vollis Simpson's "Wind Machine" was a-spin. I'm not going to wax poetic. I'm just going to let you gawk over my shoulder at Thomas Syre's "Gyre." 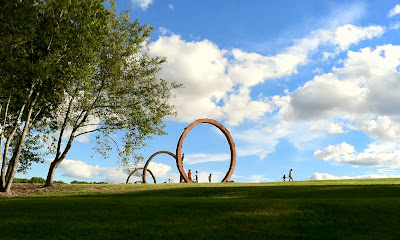 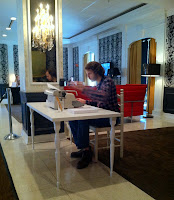 We made it back to DC and promptly collapsed into sore throats and grumpy unpacking. We rallied enough for this past weekend's (e)merge art fair, at the Capitol Skyline Hotel--right by the Nats baseball stadium--which belongs to the Rubell family. On Sunday we armed ourselves with bloody marys, and set to wandering. In the lobby Andrew Wodzianski was enacting a "Self Portrait as Jack Torrance," typing All work and no play makes Jack a dull boy over and over on a manual typewriter. Setting a different tone, the lovely Holly Bass was conducting an "Art Baptism" out by the pool, under a wind-whipped canopy, complete with community music. 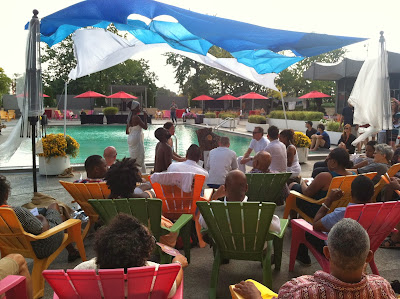 A half-dozen followers stepped up to announce their artistic ambitions, and to invoke the names (privately, as scribbled on a slip of paper) of three people who sustain their spiritual selves.  Then Holly baptized them in the Skyline's pool. It felt like I was back in Miami for a minute, in the best of ways. I felt refreshed. I sang loud. 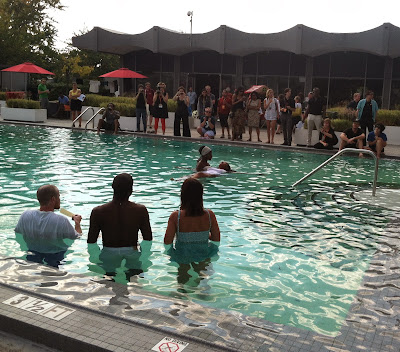 Things are a little frantic in Sandra-land right now. So this is the last you'll hear from me on the blog for a couple of weeks, until I'm in IOWA. Iowa! Where I'll live all November thanks to Cornell College, teaching creative nonfiction and, y'know, frolicking in corn fields. But maybe I'll see you, in DC or New York City? Until then~