Last week, I did a quartet of readings for Count the Waves in Virginia and North Carolina. The thing about working at home is that you almost never take a "day off." But on the road for a reading, you can explore a new town's shops, restaurants, and people, and still feel like you're putting in a day's work. It is work. You gotta be on time, have book stock in hand, give a good reading, and be ready to answer any question.

But it's a lucky kind of work, and makes up for many days spent stressing over bills and freelance deadlines. Being a writer is a way to explore the world.

Whenever I get back from one of these trips, my mind is brimming with ideas. Then someone asks "How was it?" and I never know where to start or what to say. I take snapshots, whenever and wherever I can, as a way of shaping the story.

In other words: Hi Mom! This is for you. 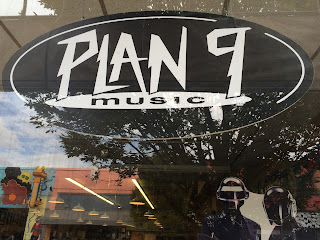 First stop: Richmond, Virginia, home to Plan 9. They opened as a used record shop back in 1981, and it's lovely to see the focus come back to vinyl--they celebrated their "33⅓ birthday" this year. Since Champneys couldn't come with me, I went album hunting on his behalf. The haul: Darol Anger's Fiddlistics, Flatt and Scruggs covering Bob Dylan, and "Cajun Swamp Music Live: The Clifton Chenier Band." 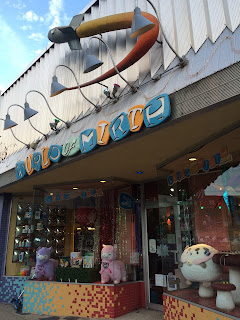 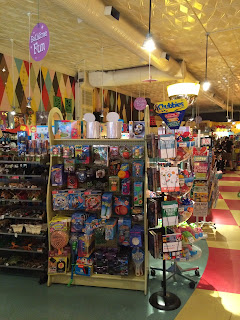 World of Mirth in Carytown is one of the best children's stores in the country--with a focus on handcrafted, environmentally responsible, and just plain joyous toys. There is a sad story behind the shop: WoM was the vision of Kathryn Harvey, who was tragically murdered, along with her musician husband and their two daughters, during a 2006 New Year's Day home invasion. That crime spree shook the community; if you've ever heard "Two Daughters and a Beautiful Wife," from the Drive-By Truckers' album Brighter Than Creation's Dark, it is about the Harvey family. But the dream lives on, and thrives. You can find every variety of creature, costume, puppet, or brightly colored goo. I'm a first-time aunt, so I went to town. (Let's hope Rhoda-Jane likes the sippy cups made to look like Ramen cups and Sriracha bottles.)

The moment the register finished ringing, I dashed down the block to Chop Suey. 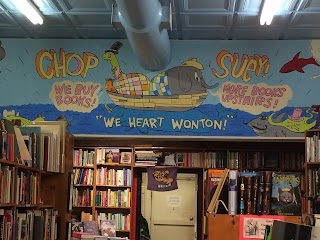 My reading companions were Simeon Berry & Cecily Iddings, en route to The So and So Series in Raleigh. We were greeted by the bear hug of Ward Tefft, the man behind the bookstore. Simeon read from two new collections; Cecily shared a long poem from Everyone Here, out from Octopus Books, one of my favorite indie publishers. 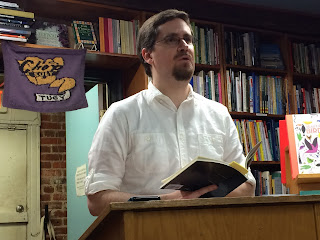 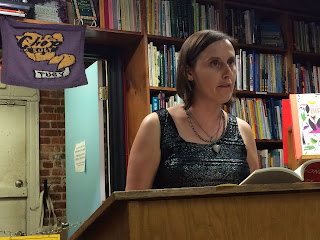 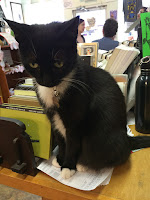 There were local friends in the audience, folks from the Blackbird community, an old UVA workshop buddy, and Kent Ippolito, husband to the late great poet Claudia Emerson. When I shared the title poem from the book, the sestina "Let Me Count the Waves," I mentioned that she had seen the very first draft (we were both at the Sewanee Writers' Conference at the time).

Afterwards, all three poets signed books under the watchful eye of WonTon, House Supercat. We headed to dinner across the street, at The Daily. 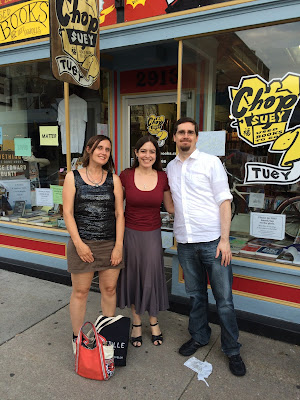 …and later, thanks to poet-Goddess Emilia Phillips and her partner Jeremy, there was pinball. And wine. And more pinball. 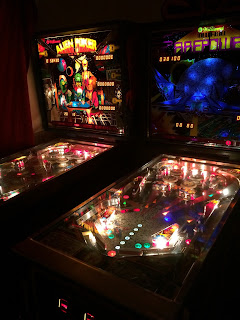 The next morning, I ventured on to Chapel Hill by way of Durham, where I hit another record shop. I also shamelessly offered to sign a copy of Count the Waves when I found it on the shelf at The Regulator, and I bought Jim Fusilli's 33 1/3 guide to Pet Sounds. 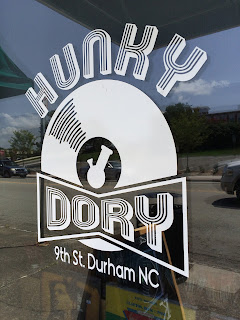 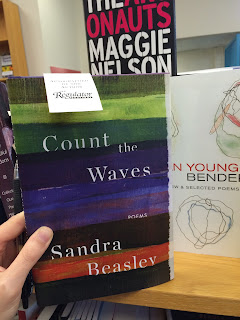 There's a shop in Durham that carries Effie's Heart, a California label. I would live out of Effie's closet if I could (the actual designer is named Kimo Frazzitta). Dresses with sleeves! Skirts with pockets! You can never go wrong with pockets. This was my splurge purchase, but it has a practical side: since I'm teaching in an actual classroom this fall (American University), I will have to put on actual clothing.

By 5 PM I had made my way to the strip mall in Chapel Hill that houses Flyleaf Books. I was intrigued by the restaurant next door, Lucha Tigre. 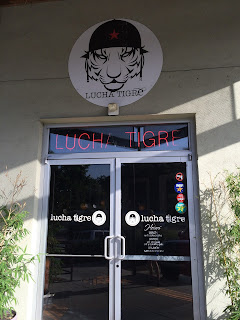 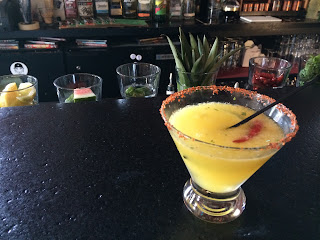 The kitchen has a crazy premise of Mexican-Asian fusion, but it sent out the best posole I've had since visiting Santa Fe. With a side of wok-seared bok choy. And a jalapeño margarita. While I ate, I browsed one of three back copies of The Sun that I'd brought down with me. Though I'd read it before, I came across David Hernandez's poem "We Would Never Sleep."  (Pause. Go read this poem, please. This post will wait.)

Afterwards I slipped next door to meet the series hosts. I balanced out my bloodstream with a lemonade, and an espresso, and we headed into Flyleaf. I knew the face behind the register: Jake Fussell, formerly of Oxford. Second shock: Travis Smith, also a friend from Oxford days, also on staff. Their faces made me feel welcome and very nostalgic for Square Books. I can't wait to be back in Mississippi on August 20. 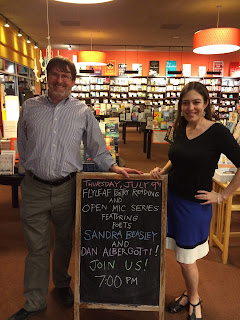 I've known Dan Albergotti for years, always admiring his work, but we'd never read together before. The selections from Millennial Teeth were dark, but stunning and timely; it's an helluva collection. One of the poems he read, "Holy Night," won a Pushcart Prize this past spring. 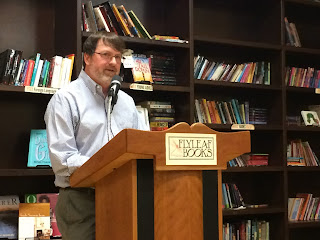 We had a substantial Open Mic peppered with tributes to James Tate. It's striking to realize how many readers'  lives he touched. The originals were one poem, one page. I particularly liked the chutzpah of Liz--a new transplant from Chicago--who delivered her poem despite having broken off a tooth in the hour before. Ouch. She read a persona poem dealing with domestic violence, re-claiming the absence as dramatic gesture.

Weird coincidence: I'd lost my own fake tooth in the hour before. It fell irretrievably through gap in the plastic casing of my car and will now forever, creepily, ride along on these road trips. Luckily, I'm due to get the permanent on Tuesday, bringing my expensive and yearlong "damn you, baby tooth" saga to an end.

Not glamorous to share that, but a poet's days aren't all pinball and shopping.

Afterwards, I got to chat with folks including Abigail Browning, the founding force behind Tate Street. How did I not know she was in Chapel Hill? I visited with her at AWP, where I talked about my love for Elizabeth Barrett Browning's "How Do I Love Thee?" for their Favorite Poem Project, an offshoot of Robert Pinsky's initiative. 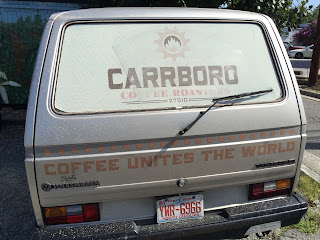 Being home-hosted is strange and lovely. You're thrust into the intimacies of a life--you see inside the fridge, you hear kids playing through the wall, and on this particular night, you arrive right as someone's grandmother has passed away. But one thing I admire in so many writers is their resilient flexibility, our recognition that life is nothing but juxtapositions and we grab at what we can--in this case, a conversation over a glass of water, before she headed to the airport to fly home to her family.

My host suggested I check out Open Eye Cafe in nearby Carrboro. Intriguing little town, with crops and flowers in every yard. I browsed my way through Fifth Season Gardening and almost bought an air plant. (Tillandsia is pretty much the full extent of my gardening; we already have one, named Sangria.) The store had a generous section devoted to growing your own hops. I hit another record store, got a snack, finished another issue of The Sun. 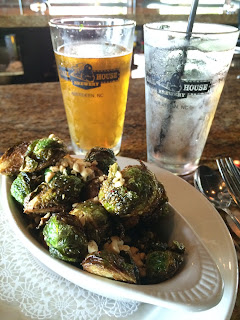 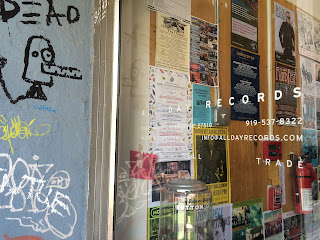 On the way to Greensboro, I made notes toward a new book idea. Vague, I know. Sorry; that's all I'm going to say about it for now.

My host in Greensboro was Rhett Iseman Trull, editor of Cave Wall, her husband Jeff, and their young daughter. I've been a reader of Cave Wall since the earliest issues, and they published selections from both I Was the Jukebox and Count the Waves. I'd brought little Audrey a stuffed fox from World of Mirth, inadvertently channeling the mascot of Scuppernong Books. 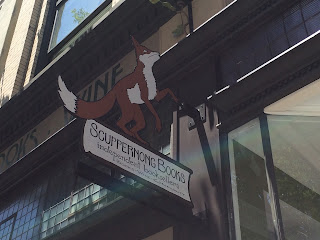 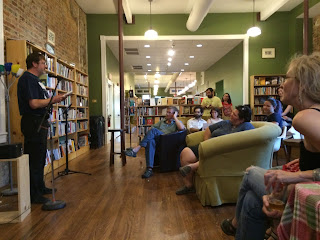 Dan and I had promised each other that we'd change up our sets. I learned a lot from hearing him read two nights in a row. Friday brought out his more playful poems, the ones that use rhetorical structures to riff on relationship dynamics. 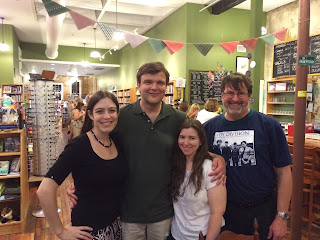 Here we are--Jeff, Rhett, Dan--friendships that, before I know it, will have spanned a decade. One person missing: Terry Kennedy. He's up in the mountains, writing in his cabin. We texted a questioning, "Where the hell are ya?" photo to his cell. Then I discovered he'd left a gift certificate for me at the register, with the invitation to have a Gibb's Hundred on him. Dammit! People that nice take all the fun out of being mean.

We headed to the Gibb's Hundred tap room and Yes, Terry, the Pale Ale was amazing. 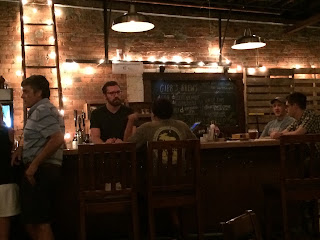 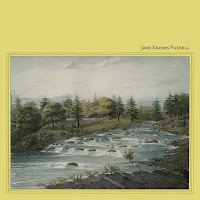 After doubling back to Scuppernong the next day for lunch and to buy Ben Lerner's Leaving the Atocha Station--which I started reading while gnawing on my salmon "bacon" BLT, with squash salad and pickled green tomatoes--I headed Pittsboro. My soundtrack for the drive was Jake's new album ("Jake Xerxes Fussell"), traditionals, and I think PopMatters got it right: "Even with all the history built into these songs and this record, Fussell still emerges as a fresh and vital new voice, as a singer, a musician and a torch bearer for every true sound he’s come across to now."

I wasn't sure what to expect in Fearrington Village. I found cows. 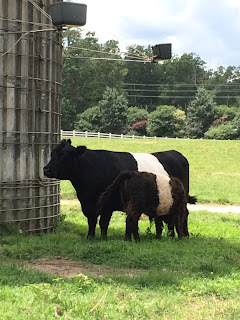 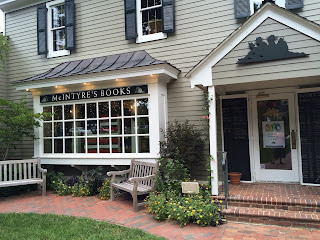 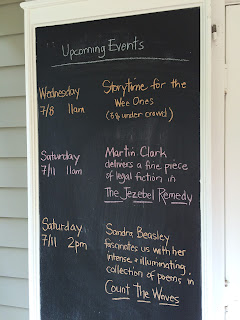 When you have three readings with big crowds, three days in a row, it is the will of the gods that you will have all of three people at the fourth reading.

But what people! A student from the University of Tampa's low-residency MFA program drove into town from his temporary home of Chatham, Virginia. The other two were strangers to me, a young couple visiting Fearrington Village from Norfolk in celebration of their anniversary. I gave an abbreviated reading and then we talked, eventually winding around to a potent coincidence: the woman had studied poetry at Mary Washington with Claudia Emerson. Claudia, whom Gordon, my UT student, is writing a 25-page essay about. Claudia, who I'd already been thinking about since Richmond, the very first one to lay eyes on what became this collection's title poem.

Thanks to the generosity of the crowd, I somehow sold four books, meaning one more book than audience members. I call that a successful reading. 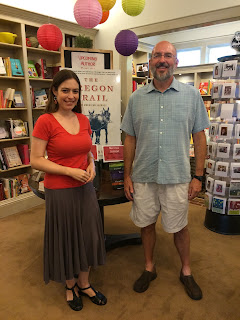 I lingered on my way out. I had a long drive home to DC ahead, with a stop off in Richmond to sign Emilia's copy of Count the Waves and to pick up take-out ribs from Fat Dragon.  This will probably be the closest I get to a vacation this summer. It didn't help my tan one bit. But it helped my heart. 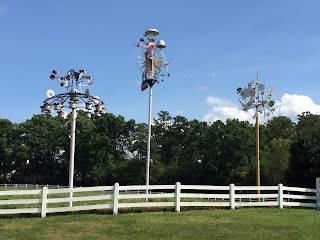