Evolution of a Valentine

Today, a student walked into my office at Wichita State University and wanted to talk about sestinas. Yes, please! We got to this place from her interest in poems that channeled crime, noir, and sustained narrative, which had led me to suggest Jim and Dave Defeat the Masked Man, by David Lehman and James Cummins.

The sestina was a new form to her. She had looked up the basics of the history and patterning of end words. From there, we talked about organic modes to which the sestina might lend itself--poems of fixation, of worrying--and looked at a few favorite examples.

Since she seemed a bit nervous about the process, I offered to show her some drafting notes from way back when. I first scanned these to appear in Issue Two of Pelorus Press, a nifty resource for anyone interested in tracking the art of literary editing.

First, scribblings during a long road trip to visit Sarah Lawrence. (The future founding editors of Pelorus were in that class, which belonged to Jeffrey McDaniel.) 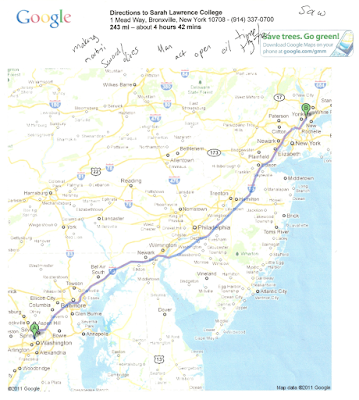 I was reaching for words with some syntactical flexibility--"saw," for example, or "time" / "thyme"--but otherwise I wasn't committed to an idea. At some point I flipped the page over and tried to distill my options. 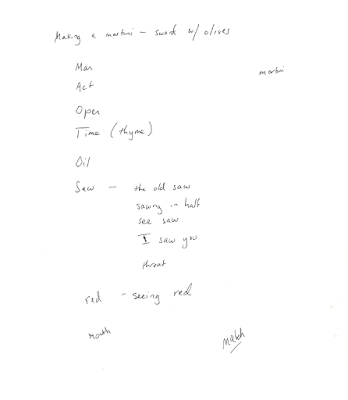 Out of this play, one image had arisen: a martini with one of those inexpensive cocktail swords. Did that mean this poem would be set in a bar? Not necessarily, but I was in the setting of a bar when I picked up my drafting a few hours later. 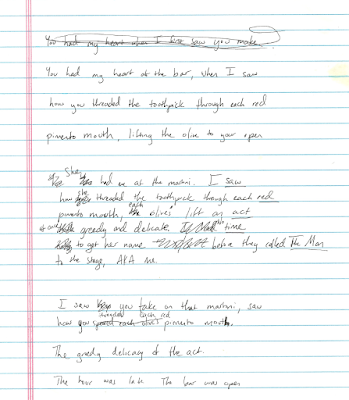 Always a little painful for me to read through the roughest of rough drafts, since many of the phrasings veer toward emotional and placeholder language ("AKA me"). But at least the wheels are turning. In particular, I was weighing whether the speaker would directly address the object of his desire. I had realized that if I wanted to use "act," the speaker needed to have an actual act of some kind. 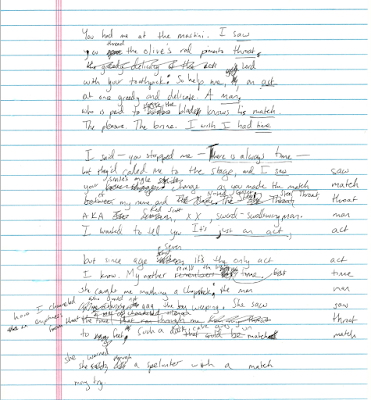 For me, the litmus test is those first two stanzas. If I can place the end words first voluntarily, then as directed by the form--if I justify the reflexive moment, transitioning between stanzas 1 and 2--I get excited. Here a conversational mode facilitates the required echo of "time." I still haven't figured out the central conflict: yes, his job might be a deterrent to dates. Yes, there might be humor in tracking how a child trains to become a sword-swallower. But what's the real-time risk going to be? 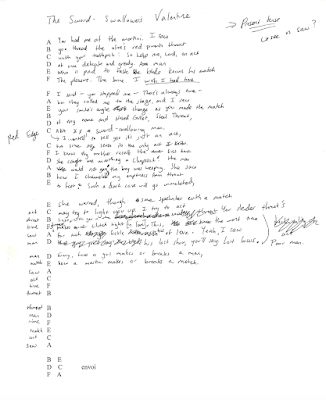 I've moved from lined notepad to trusty template--a document that lives on my desktop for when I'm playing with the scaffolding of this form. The child's prop has changed from chopstick to butter-knife. Although committed to POV, I'm still trying to decide tense. The toughest part of the sestina looms, stanzas 4/5. This is where you have to change it up; the sestina is a marathon, not a sprint.

After a lifetime of avoiding bloodshed, the speaker now craves this sign of vulnerability that is embedded in love. Stanza 5 re-harnesses the power of endstops. That elusive "oil," which proved unwieldy as an endword, gets a chance to appear. (Only after I spend an afternoon researching the art of sword-swallowing, and discover that the camellia oil on the blade is borrowed from samurais.) "Saw," the first word I scribbled before this was even sure it could be a poem, is also where I get to land. I've probably read the poem aloud twenty of thirty times at this point, as part of the revision process.

What interests me about the form is the push-pull between the control you have (choosing end words) and the control you surrender (the narrative spun out by those end words). This poem is one of six sestinas that appears in Count the Waves. I ultimately obscure the stanza breaks, because I want it to read like a dramatic monologue. That version can be found here. I'm glad to look back and be reminded of how I found my way from draft to draft. I'm grateful that a poet walked out of my office ready to tackle her own sestina. Though I am 1,253 miles away from my husband, that's all the valentine I need.
Posted by Sandra at 4:51 PM No comments:

I woke up at 3:41 AM and haven't been able to fall back asleep. And I'm thrilled about that. Because I woke up from a dream of writing, and that means writing is nigh.

My creative instincts go dormant in times of high stress. So do my social media instincts; I drop off of Facebook and Twitter and, evidently, this blog. That's a good survival tactic--I focus on my to-do list, and steer around antic or angry one-line postings--except I feel guilty about the isolation, anxious I've misplaced myself. In the past two weeks, I moved and then I moved again. I stayed up until 2 AM unpacking the last of cardboard boxes in our new apartment and, after a few hours' sleep, packed my suitcases and made the 20-hour trip to Wichita State University for February. The bed & breakfast where I'm staying has an in-house kitty, a Russian Blue who stares at me dolefully and merely tolerates my petting. I miss the polydactyl tortie who leaps up on my pillow and gently extends a paw to tap me on the forehead.

Travel has been the catalyst of my 30s. I have to laugh when I remember missing a dear friend's wedding, back in my 20s, because at the time I couldn't fathom driving to Nashville alone. Travel has offered me the chance to see incredible things, and to clarify what I can do with my life. But at times it is lonely, especially when getting to know the prairie winds and 4 AM trains of Kansas.

A couple of nights before I left home, I hosted a poetry dinner at the Arts Club of Washington. I've been doing these for a while now, as a perk for the members. Each salon is a chance to read and discuss poems, curated to theme, over a three-course meal. The theme this time was "Travel," and here are the texts I used: 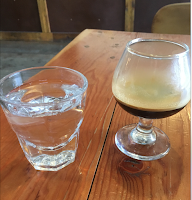 So what sparked a creative wake-up call this particular night? After a pressured first week of meeting students and eating dinners of boxed soup, I finally took a day to explore Wichita. Nothing too ambitious, but I ventured out to get Kālua pork with fresh white rice and a side of Lomi-Lomi salmon at Noble House, a Hawaiian lunch plate spot as good as any I've had in Kauai. I suspect it was Chef Akamu Noble himself working the register. Upon hearing I was a poet from D.C., he recommended I visit Reverie Roasters up the street, where I got a "boneshaker" espresso (I'm a pushover for espresso with a side of fizzy water). Then, just for the excuse to stay, I drank another two cups of batch brew coffee. Cue the 3:41 AM wake-up. I did a few hours of drafting on comments for forthcoming poetry anthologies, so that's two items off my to-do list. But what mattered most was being surrounded by the hum of other people living and working. The funny thing about traveling far from home is that my goal, once I'm here, is always simply to make myself feel...at home. Now I just gotta befriend the cat.
Posted by Sandra at 7:57 AM No comments: