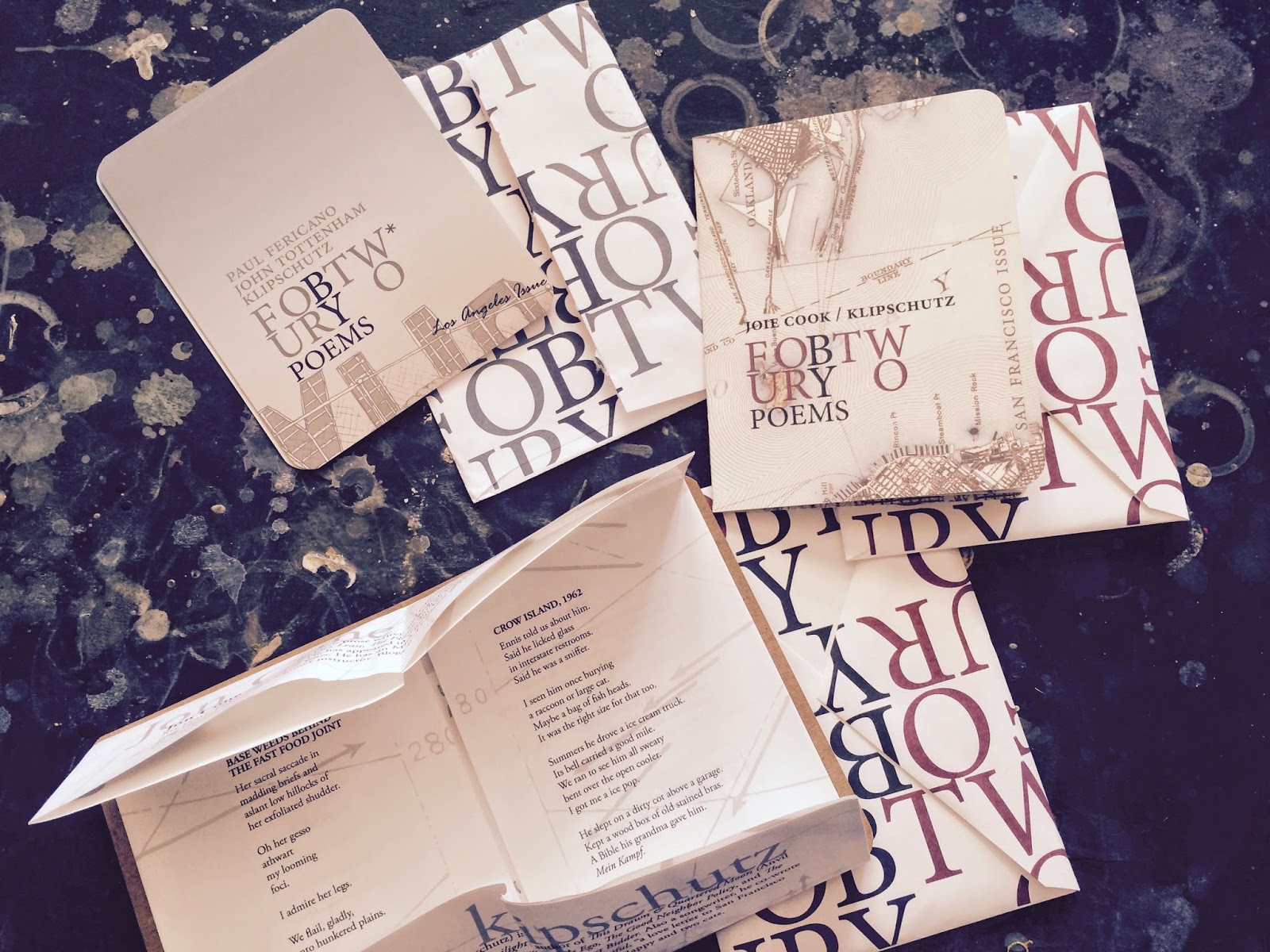 I have been to California exactly twice. The first time was for a road trip with my dad that began in San Diego and ventured up Route 1 for four days. We rented a yellow Mustang, which we drove with the top down whenever possible ("I like it when you let your hair whip into knots"). I insisted we visit the Beverly Wilshire hotel, but was disappointed when it looked nothing like the scenes from Pretty Woman. Every restaurant we sat down in, I ordered the sashimi salad.

In 2007, I flew out again for a two-day work trip that was memorable for three things: the plush bathrobe at the Omni, blooming bougainvillea everywhere, and hearing poems read in the voice of Dr. Spock, a.k.a. Leonard Nimoy.

In a lifetime in which I am constantly grateful for travel, I know better than to complain. But I would really like to spend more time in the Golden State. In the meantime, I'm thrilled when someone sends me a snapshot of my book on the shelves of City Lights, or mentions spotting my work on a UC-Irvine professor's desk. It's a reminder: poems are not bound to their authors. They get around without our help.

When Kurt Lipschutz (who publishes as klipschutz) sent me an email with the subject line "greetings from san francisco, and…" I knew that, however random it was, it was going to be good. Turned out to be great: an opportunity to be featured in Four by Two, which he called a "mini-mag quarterly"--low-fi, high-concept--published in hand-numbered editions. No submissions process; poets are selected through a combination of shared interest, referral, and lightning strike. The print run of the first issue was 150 copies. They have now doubled that to 300, and counting.

As the name hints, each issue consists of four poems by two contributors. Want a year's worth, by mail, sent in a spiffy bespoke envelope? Just $20.

When the three previous issues arrived, I gasped. You can see by the picture above--these things are gorgeous. I was grateful for a chance to group some poems by theme, without having to worry about previous publication. We decided to bring together two from I Was the Jukebox, and two from Count the Waves, for a portfolio of love (and love lost, and love disrupted) that we named "Arrhythmias." More emails. Proofing.

Then, lo and behold, the box arrived…. 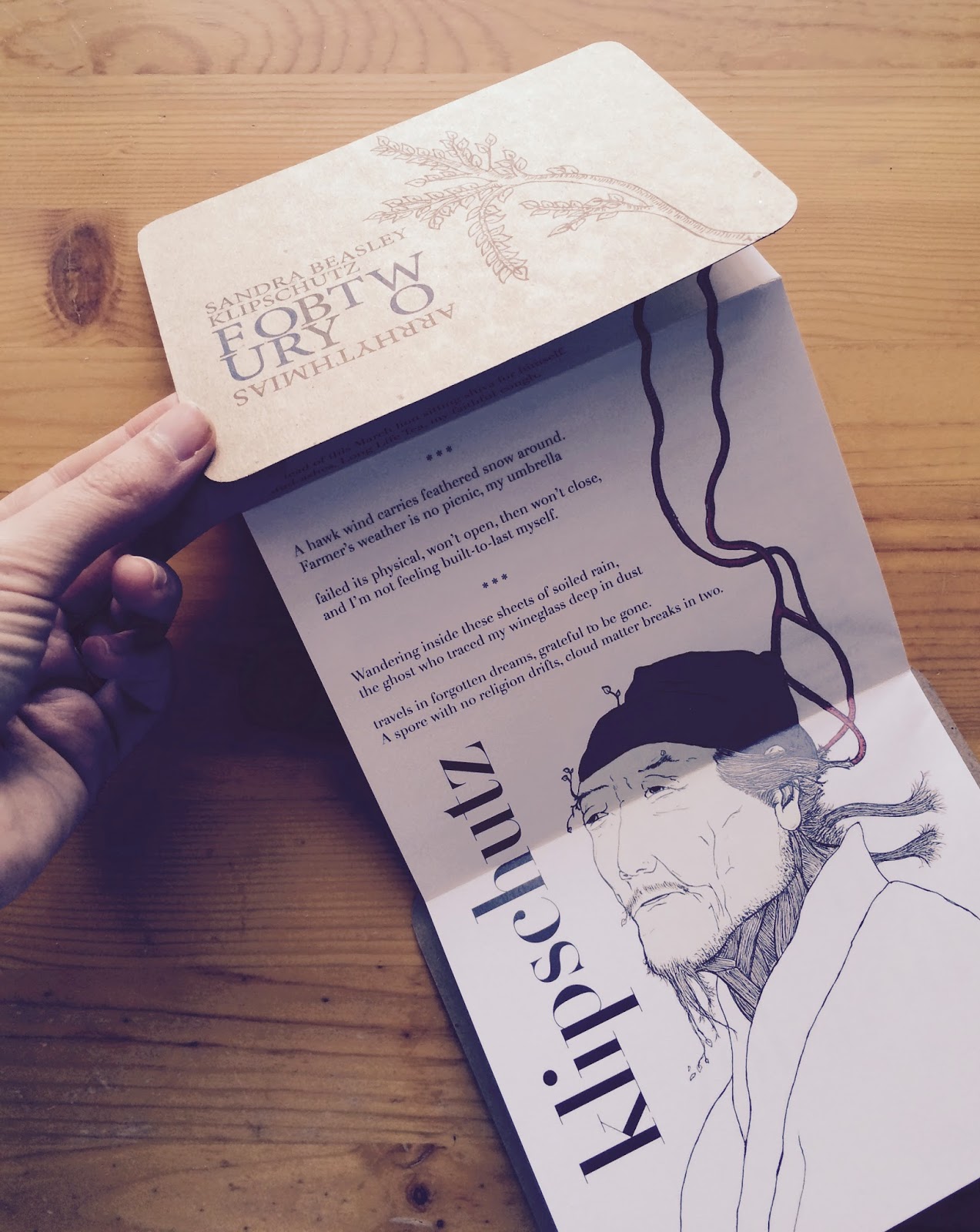 I knew that Kurt's collaborator, Jeremy Gaulke, would create art specific to each layout. But I couldn't have dreamed he would come up with an image that takes its cue from "Parable," in which one's worries "take his insides as their oyster; / coating themselves in juice--first gastric, / then nacreous--growing layer upon layer." 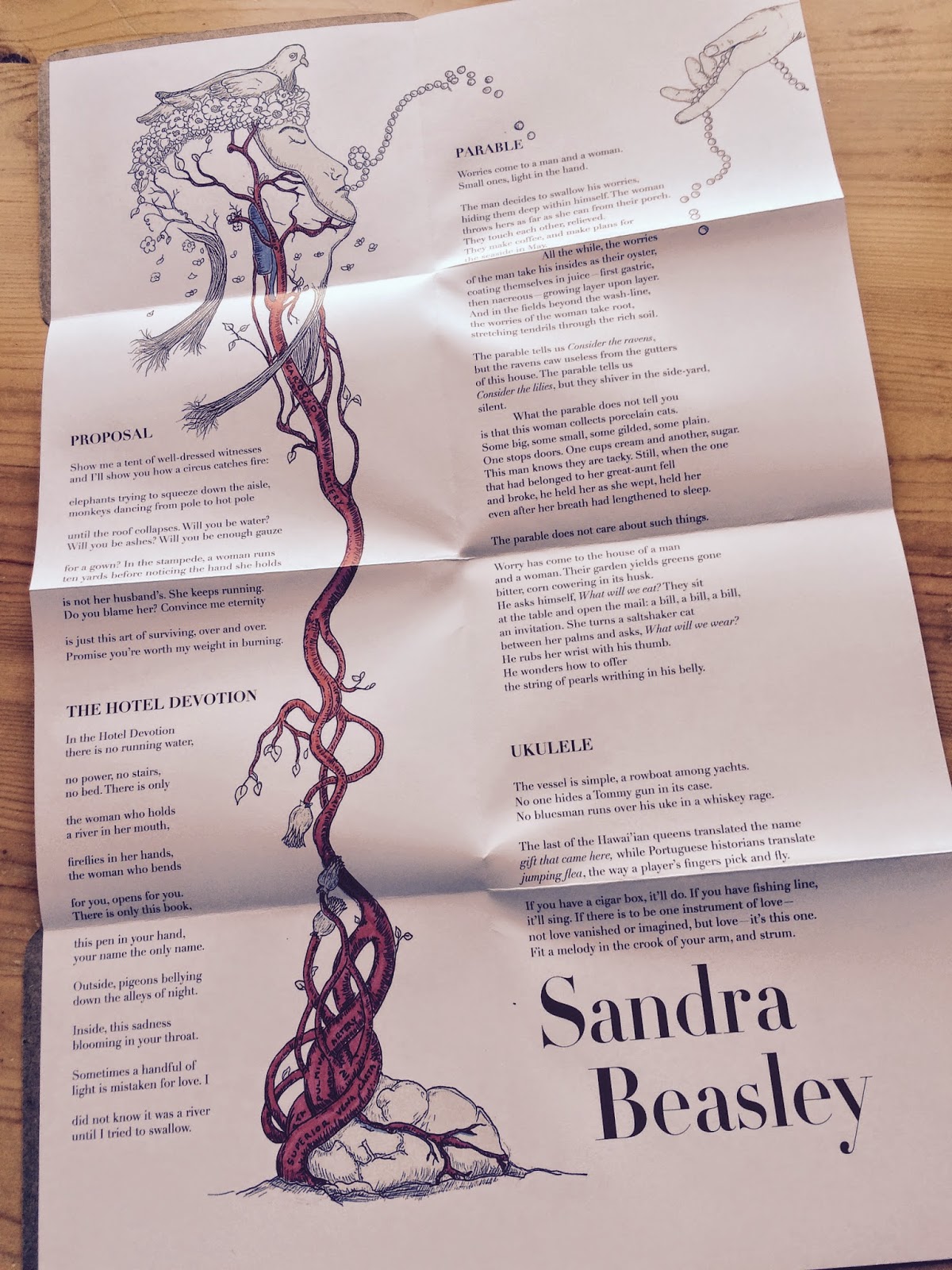 If you could see this up close, you'd note how the heart is a properly organic organ, complete with the labeling of superior vena carta and the pulmonary artery.

This kind of project is designed for eccentric makers and passionate readers; it is not a strategy to harvest media buzz. Kurt has a lot of other irons in the fire, including his ongoing songwriting with Chuck Prophet. Still, Zouch magazine has noticed, first with a review and more recently via an interview with Jeremy for their "Spatial Relations" series, and I suspect more press is on the horizon.

Most poets are swamped with journals that accumulate, untouched, into a source of guilt. But Four by Two is a breath of fresh air; something you can unfold, read/enjoy/puzzle over, pin to your bulletin board for a week, and then move on. If you want in, subscribe here. One of the issues in this next season will feature the work of Sarah Hannah, a personal favorite who we lost far too soon--including, I hear, a never-before-published poem.

This last month has been a blur of work, more work, stressing over buying our home, a flu, five days of teaching poetry to 10th graders, and now a cold. I hope, if I ever get out to San Francisco (maybe for Count the Waves? maybe?), that I get to shake klipschutz's hand and thank him for reminding me how far a poem can travel--even when its author is hunkered down, sniffling and sipping her umpteenth bowl of collard soup. Though for what it is worth, if you're going to binge on soup, collard soup is the way to go.