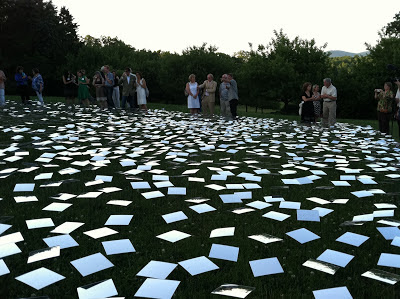 This would have felt like the longest day no matter what, because I spent seven straight hours of it completing a grant application. But it is the solstice, the literal longest day of sun all year. My hair is also long these days and right now, like a fairy-tale princess, rippled. That's because I tucked it into a bun on Wednesday while it was still soaking wet, where it then stayed for eight hours straight. Because I am Working--and it's been a while since I felt that pressure of must be clean & must look professional.

Three days a week I am going to my old office to send emails, corral files, and get things in order. A lot (books!) has happened since I last worked there, but the vocabulary of itineraries and rolos remains the same. As of late I have dusted, pitched defunct CD players, and pulled dead leaves off a valiant but struggling purple plant of unknown origin. There's several cabinets of papers to compress and label. There's about a zillion cards and letters to answer. Why is it so satisfying to do these tasks for someone else, these things we eternally put off when it comes to our own lives?

I am profoundly grateful for this opportunity to help out my former employers. We come to working together in a far better and more equitable place than before, at ease with each other's rhythms and idiosyncrasies. And frankly, it feels good to have an hourly wage again, to have stretches when my time is invested in someone else's priorities and creative output. As I type that I look around, worriedly, like someone is going to come and take my "full-time writer" license away. Eh. When I tell students of creative writing to resist falling into the assumption they must primarily teach to support themselves--to choose that path only if it truly appeals--I mean it. But everyone's got to pay the bills. In fact, I would urge those looking for work that dovetails with a writing life to investigate whether their local college has a retiring professor who needs help prepping papers for donation. It can be sneaky, fascinating work, filled with stories.

Is there a job you'd return to, if you could? Knowing what you do now?

The news has been shared elsewhere that a selection from my third collection (in the hands of editors now) has won the 2013 Center for Book Arts chapbook prize, judged by Harryette Mullin and Sharon Dolin, and will be published in a letterpress, limited edition of 100 copies come this fall. Having stood at the Center's table during many an AWP Bookfair, gazing longingly at the array, it's surreal to think my work will soon be among them. The award comes with a bit of money, which gets added to a substantial freelance assignment I'm working on right now, which gets added to my pay from the work described above, which equals a summer's worth of rent. 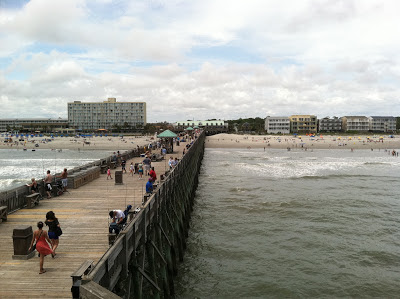 The thing is, and it's healthy to be transparent about this, no one of these gigs could be reliably multiplied into "making a living." For the one contest I won, I spent hours and $$$ applying to a half-dozen more (with many of the same poems!) to no effect. Though I expect this freelance essay to run on time, or close to it, there are several more mired in editorial limbo and therefore unpaid. I couldn't and wouldn't return to my old job five days a week; that would minimize the possibility of writing new poems, much less touring to read them. So, I juggle, which is the true task of the full-time writer. It's a Friday night, at 10:30 PM, and here I am trying to rally to get back to work. 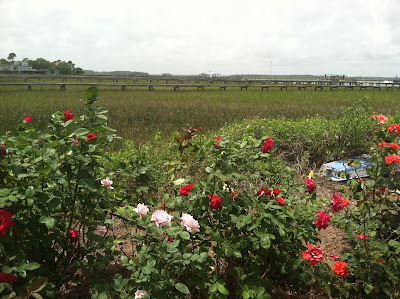 This post is not illustrated with me at a desk, or me up to my elbows in dust and bent file folders. Instead I'm sharing snapshots of "The Commission," a one-night art installation in Charlottesville, courtesy of Virginia Center for Creative Arts; a book arts exhibit at the Halsey Institute of Contemporary Art in Charleston; a glimpse of the seashore at Folly Beach, from the end of the pier; a glimpse of the marsh (and bordering roses) that line the other side of the island; and below, the set at intermission--waiting for the comedy to commence--of The Shakespeare Theatre's The Winters Tale, which I attended with my dad for Father's Day. 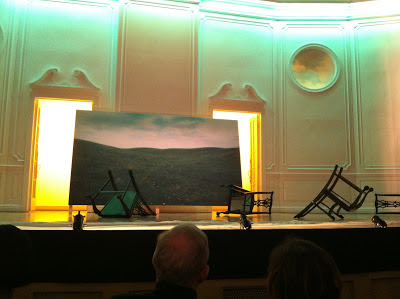 Not pictured: a sunburned shoulder, NOPA's brussels sprouts, and Star Trek: Into Darkness. These have also been a part of my crazy, busy June. That's the thing about work, though we knock it, though we whine. Work yields play. Wine tastes sweeter after a day of thirst. Let me go test that theory now, and I'll get back to you.
Posted by Sandra at 10:23 PM 1 comment: