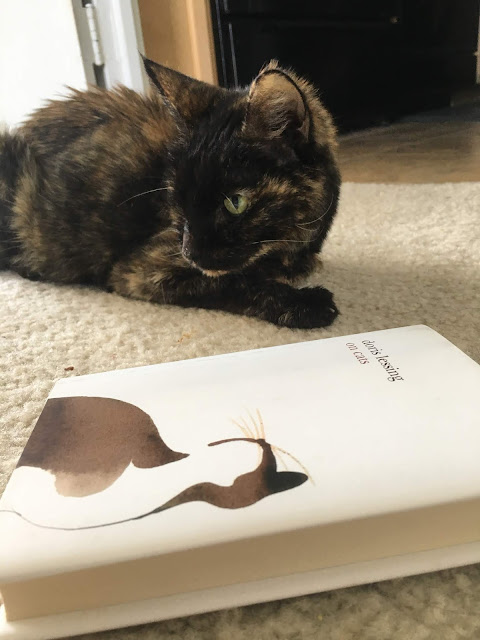 When we adopted, her name was explained has having been a change from "Whizzer." Courtesy her first owner, who had passed away, leaving a nine-year old cat who no one in the family was willing to adopt. The folks at the Montgomery County shelter figured "Whizzer" was an unnecessarily alarm-inducing name, so they changed it to "Whisky."

The name Whisky appealed to me. A quirky polydactyl cat temporarily housed in a vegan warehouse (the shelter had made her anxious) appealed to me. Her photo appealed to me. All these things appealed to my sister, too; independent of anything she found the same cat advertised on Craigslist and wrote me, I think this is your cat. Fortunately my husband agreed, and we had finally moved to a place whose lease allowed a pet. We drove up to Rockville to meet her, this great big Muppet-cat, and the first time I leaned down to look her in the eyes she tapped me nose-to-nose.

From the get-go of bringing her home, she had some medical issues. I'm too exhausted to go into them, except to say that we fought hard. And I've always said to her, since then, hunkered down at eye level: Thank you for staying with us.

Turned out, I needed a cat. I needed company for 2 AM stints of writing or editing. I needed the slow blink, the trill of curiosity, and the oddly conversational vocalizations we shared as I broke the catnip treats in half so she could smell their contents. I needed to watch her discover my husband's gentleness and humor. I needed to know that this household we've created was so filled with love that it could shelter a creature.

I say "creature" intentionally--I've never enjoyed the metaphor of a pet as a child. We didn't meet Whisky until she'd already had a full, mysterious life that included loss of someone she'd probably loved. We chose her. She chose to stay.

I have traveled so much in these past four years: to Florida, to Mississippi, to Cyprus, to Kansas, to Cork, and so on through dozens of 2-3 day overnights. During that time, the simplest check-in with my husband took the form of a texted snapshot of Whisky. He took such good care of her; they had their own rituals. She'd be lounging in the sun, or nibbling, or staring at the camera with a gaze at once penetrating and slightly dismissive. That image told me that all was well.

When the two of us traveled together and made our way across the parking lot, lugging luggage, I'd turn to him and ask, Where's my kitty?

Waiting for you, he'd always answer, and that gave me great joy.

She was an exceptionally handsome cat. Everyone thinks such about the cat they love. But she was a tortoiseshell with 22 toes and a fox-like face.

My sense that Whisky's time with us was drawing short came on about two weeks ago. One night, she settled onto second and third row of pillows behind my head--a favorite spot--first facing toward our closets and then, as she often did, methodically rotating and resettling so she could watch me sleep. She reached a paw out toward me, as she often did, but settled it on my forehead instead of the part in my hair.

The feeling of her cool, cupped paw-palm was at once soothing and unsettling. The only other times she had done that, I've been in tears. Why was she comforting me now? The next night she jolted awake at 5 AM and was inconsolable, wanting the underside of her chin to be stroked again and again, pressing her jaw and cheeks into to my touch. Something had shifted. (Her body, as it turned out, was failing in every way--digestion, metabolism, joints. No point in detail, but it was utter.)

She held on until my husband came home from August at an art colony in Vermont. We had this quiet week together that included familiar rituals. She sat between us on the couch as we watched evening television. She wolfed down some chicken pate. Her energy surged long enough to hunt a few spiders.  Friends came, my family came, and she had as gentle an exit as anyone could ask. Tomorrow we'll take her body down to Marshall, Virginia, where the country vets will care for her one last time. I'm so grateful to my cousin Kathy and everyone on staff there.

That first morning when, for whatever reason, I knew, I set aside everything on my to-do list to read Doris Lessing's On Cats. I'd bought the book at Whistlestop Bookshop while in Pennsylvania for a reading at Dickinson College. The bookstore had an in-house cat, a much needed sighting after a particularly intense stretch of travel.

Lessing is of an older generation. There's lots in the book (an aggregate of three essays) that is worthy of skepticism in this contemporary age--everything from the language toward other cultures to the attitude toward spaying and population control. But I found myself deeply soothed by two things, which I'll share here.

One was the unmistakable takeaway that when a household is meant to have cats, it is in designed into the very architecture of the space. A particular cat will come and go, sometimes heartbreakingly, but your attitude toward those events has to respect the loss while protecting the architecture. In other--do it right, as best you can, so that you have the energy to do it again. I've really clung to that principle in these past few days, centering Whisky's passage instead of my grief. Though I'll admit that I pounded a pillow and howled about two hours ago, once I was alone in the apartment.

The other comfort was these paragraphs, quoted from the end of Lessing's book:

What a luxury a cat is, the moments of shocking and startling pleasure in a day, the feel of the beast, the soft sleekness under your palm, the warmth when you wake on a cold night, the grace and charm even in a quite ordinary workaday puss. Cat walks across your room, and in that lonely stalk you see leopard or even panther, and it turns its head to acknowledge you and the yellow blaze of those eyes tells you what an exotic visitor you have here, in this household friend, the cat who purrs as you stroke, or rub his chin, or scratch his head.
...
When you sit close to a cat you know well, and put your hand on him, trying to adjust to the rhythms of his life, so different from yours, sometimes he will lift his head and greet you with a soft sound different from all his other sounds, acknowledging that he knows you are trying to enter his existence...He likes it when we sit quietly together. It is not an easy thing, though. No good sitting down by him when I am rushed, or thinking about what I should be doing in the house or garden or of what I should write. Long ago, when he was a kitten, I learned that this was a cat who demanded your full attention, for he knew when my mind wandered, and it was no use stroking him mechanically, let alone taking up a book to read. The moment I was no longer with him, completely thinking of him, then he walked off. When I sit down to be with him, it means slowing myself down, getting rid of the fret and urgency. When I do this--and he must be in the right mood, too, not in pain or restless--then he subtly lets me know he understands I am trying to reach him, reach cat, essence of cat, finding the best of him. Human and cat, we try to transcend what separates us.

Rest well, pretty girl. You've earned it. Thank you for staying with us.