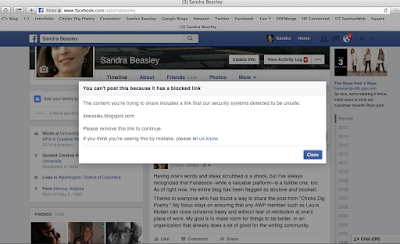 Thank you to everyone who spoke out last week, when "Chicks Dig Poetry"--first the specific link to the post below, then the entire blog--was flagged (by who I'll never know) as being "abusive" and was blocked from Facebook. All earlier links to CDP on my personal or Author page were compromised as well. For some of us, the scrubbing of links took portions of a larger conversation with it.

This is a reminder of how easily social media's tools to protect can be misused to censor. Initially, I had no recourse beyond submitting generic forms to contest the decision. But an outcry on Twitter got Facebook's attention, and a friend facilitated an in-house request to investigate. The flag was subsequently overturned, and CDP is allowed on Facebook's pages.

At no time have I had reason to think anyone closely affiliated with the Association of Writers & Writing Programs triggered the block. Staff members went out of their way to express support. It's important to not conflate what happened here, as frustrating as it was, with people's concerns about AWP leadership; by the same token, having this issue "fixed" should not be false comfort when real concerns remain.

I spoke with AWP Executive Director David Fenza for an hour on the afternoon of Wednesday, August 19. I appreciate him taking the time. We are in agreement on some things, and I respect that he has dedicated years to fostering this organization.

That said, I return to three points:

-Mr. Fenza interpreted sending and favoriting Tweets, as Laura Mullen did using her personal Twitter account, as public actions in her capacity as an academic.

-He decided to phrase his subsequent letter to her as he did [link provided].

-He chose to cc this letter to the Department Chair and Vice Chair at Louisiana State University, where Laura Mullen is the Director of Creative Writing.

My concerns related to these points were not dispelled by our conversation. There were internal contradictions in Mr. Fenza's justifications. There are external inconsistencies with the values I hold as a writer and a member of AWP.

That same day, AWP released this statement via their website [text linked here].

There has been one thing that everyone who I spoke to because of an AWP affiliation seemed to agree on: the Executive Director acted in error. But there has been no public acknowledgement, even in a statement that mentions me by name. As of checking in with Laura Mullen last night, there has been no private apology either.

I understand the need for off-the-record conversation, especially when people are gathering facts. But when the gap between what is said behind the scenes and what is said on the record grows too significant, everyone's credibility is damaged. If we let the silence stand, then we send the message that this is all okay.

This is not okay.

In the life of any organization, members will have questions, criticisms, even flat-out complaints. Sometimes the most inconvenient ideas yield the most growth. We have to be free to voice dissent without fear of disproportionate recrimination. Our latitude to speak, and our ability to object, should be regardless of our individual rank or stature. If there are not appropriate protocols in place to ensure that, there should be.

Laura Mullen deserves an apology.
Posted by Sandra at 10:28 AM 3 comments:

In Praise of Transparency & In Support of Laura Mullen 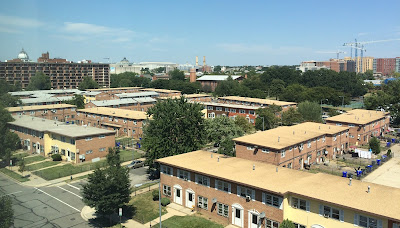 (Above: today's view from my living room window, the Capitol on the far left.)


Once a month, I update this blog. Three times a month, I consider suspending it. Not because I haven't loved the space--and I appreciate those of you who check in for new posts--but because much of my freelancing energies competes for the same stories, interests, and time that were originally central to "Chicks Dig Poetry." Still, this blog persists, part diary & part travelogue. And in part because news comes along, from time to time, that needs a space to be addressed beyond Twitter and Facebook.

For the past few years, there has been increased scrutiny toward the annual AWP Conference. In part, this is a positive testament to the conference's influence (it's a fun, productive time for many, and for many, participation is an important part of their career path) and popularity (15K attendees in 2015). In part, this level of discernment is a reflection of critical attention to gender and racial diversity, and other identity politics such as disability, on the literary landscape--most easily evidenced by the annual VIDA Count. After AWP determined the accepted panels for the 2016 Conference in Los Angeles, a technical glitch caused applicants to be able to prematurely view their status (or some telling variation of it). So understandably, perhaps they were on the defensive when the official outcomes were announced.

Like many, I shared this list via social media. Some of the literary community called for a breakdown of who was "accepted" (if affiliation with a panel acceptance equals "acceptance") broken down to race and gender, with an eye toward ratio of application versus acceptance. In example, Laura Mullen's RT to my Tweet~

I am embarrassed to admit, I didn't reply. Not because it wasn't a legitimate question, but because that was a day I was largely offline, and once back online I didn't have the answer, and it wasn't my answer to give. But Mullen had also taken her query to the audience of @awpwriter (AWP's handle) and Twitter as a whole, as is her right~ 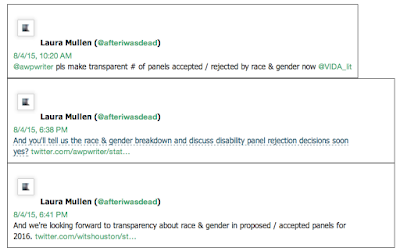 And, here's what happened:

David Fenza, the Executive Director of AWP for the last 20 years, wrote her a scolding letter. As if she was an obstreperous schoolgirl. And he cc-ed the Chair and Associate Chair of the English Department at Louisiana State University, where Mullen is employed--though her Tweets were from a personal account with no LSU affiliation.

Laura Mullen shares the letter in its entirety on her blog, "afteriwas dead," but let me single out two particularly combative phrases amidst what is otherwise a lot of boilerplate in descriptive praise of AWP's activities:

We would hope that the director of a member AWP program would support our association rather than cast aspersions upon it via twitter, as you have done.

We are sorry if proposals your cared about deeply were rejected. Most of the submissions were rejected, including those with many of today's most prominent authors; but it’s unfair to suggest, as you have, that AWP discriminates against women and other groups when the subcommittee has helped to build an extremely diverse program.

As it happens, Laura Mullen is an accomplished author and an established teacher; she is the recipient of multiple Louisiana Board of Regents ATLAS grants and MacDowell Colony fellowships, as well as being a 1988 NEA fellow, a National Poetry Series winner, and a graduate of the University of Iowa Writers' Workshop.

What if she had been a young voice, a tenure-track hire fighting for security at LSU?

The fact that David Fenza--an academic who presumably grasps such subtleties--would take such a malicious intimidation tact is deeply inappropriate.

Just to make clear: I think it might be logistically infeasible (I deleted the word "unfair" here, which is not logical) for AWP to be expected to retroactively gather and provide this information on the racial / gender breakdown of accepted versus rejected panelists for the 2016 conference. In this, Laura Mullen and I disagree. But I think it is completely within her rights to request the information.

Her request draws attention to a critical opportunity. Because applicants have to draft and submit a bio, meaning there must be a degree of active engagement, AWP can add an optional gender and race survey (ideally with the option of selecting multiple "race" categories, since the signifier is flawed). Already, this would have an advantage over VIDA's struggle to document publication statistically based on--at least, initially--byline alone.

Just to make clear: AWP does a wonderful job, with a very small staff, serving an extraordinarily large constituency with a plethora of needs. They are often asked to perform duties above and beyond what they were trained for, or are compensated for. I admire wonderful AWP Board and Committee Members like Oliver de la Paz, Ira Sukrungruang, and Anna Leahy. I have attended the last decade's worth of conferences, including getting food poisoning at the Austin conference hotel. The Writer's Chronicle is a really valuable resource. I judged an award for AWP earlier this year. I am scheduled to take part on an AWP panel in 2016, on "Furious and Burning Duende."

And I think this is a profoundly bad thing that needs to be made right.

Fenza formally identified himself as the Executive Director of AWP in his email signature. Is this what AWP wants to stand behind? Bullying of those who dare raise concerns about diversity?

Because, if not, he owes Laura Mullen an apology--with a cc to her colleagues.

Since it would be disingenuous to raise such a strong objection without direct contact, I am (simultaneous to this blog post) sending an email to David Fenza with a cc to Christian Teresi (Director of Conferences), Bonnie Culver (Board of Trustees Chair), Robin Reagler and Oliver de la Paz (Board of Trustees Vice Chairs).
Posted by Sandra at 4:10 PM 12 comments: