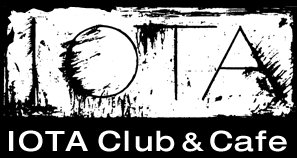 Dear IOTA, I know exactly how to get to you--Route 50 to 10th, then the sneaky cut across Danville Street.

Dear IOTA, I've spent a lot of time balanced on the black-cushioned barstool, scribbling, over a concrete floor layered in slate blue and flecks of goldenrod.

Dear IOTA, you were the only place I ordered Samuel Smith's Nut Brown Ale.

Dear IOTA, a petite woman with red hair used to recite brief, rhymed poems in a thick Irish brogue to close every Sunday Poetry Series. I can't remember her name, but I can picture her face.

Dear IOTA, you're where I got to know the glory of Fatslug.

Dear IOTA, your cover charge was always on point, never too much.

Dear IOTA, in 2005, I could figure out someone pretty fast by asking their favorite spot on Wilson: IOTA, Galaxy Hut, or Whitlow's.

Dear IOTA, I remember when your two halves were separated by the round bar, and sometimes it got weirdly complicated to meet up with a friend.

Dear IOTA, I had a crush on one of your bartenders and used to bring my MFA homework around on slow nights to keep him company.

Dear IOTA, he played guitar at the Wednesday Open Mic and that cured my crush.

Dear IOTA, you know how to cook a salmon fillet.

Dear IOTA, the clip-on light for your music stand is absurdly bright.

Dear IOTA, my family got used to spending Mother's Day with you, because Miles kept putting me on the May reading schedule.

Dear IOTA, I must have had a dozen conversations with Steve, and he was always too modest to mention he was the co-owner.

Dear IOTA, glass blocks will never go out of style, nor hippie paintings on brick of a smiling sun, leaping fish, and flowering vine.

Dear IOTA, you used the visible I-bar along the ceiling to store CDs: brilliant.

Dear IOTA, when the mailman came to the door at night--he got the apartment number off my mail--to invite me out for a "date," I still dared step outside a half-hour later. Because I was heading to IOTA and I wasn't going to miss it for that creep.

Dear IOTA, there's never a more sensible place to store extra chairs than in the eaves over the exit.

Dear IOTA, may your soundboard be ever protected by concrete blocks painted black.

Dear IOTA, I was little thrown off the first year you draped Christmas lights all above the stage, but they've grown on me.

Dear IOTA, no book I wrote was real until I read from it on your stage.

Dear IOTA, I remember when you served your french fries on oval plates piled absurdly high, each plank the full length of a potato.

Dear IOTA, for a time you made the terrible decision to serve french fries in mugs.

Dear IOTA, the batter was still crisp, the pepper sharp. You make the best french fries in the world.

Dear IOTA, Clarendon developers will spend hundred of thousands of dollars trying to recreate the very thing that they crowded out.

Dear IOTA, your name is about to become a shibboleth.

Dear IOTA, on Sunday someone got up and read a poem for Charlottesville, and then another person, because you're where we take the drafts trying make sense of things.

Dear IOTA, you're the only place my voice still shakes as I step up to the mic. 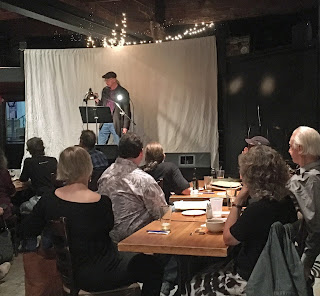 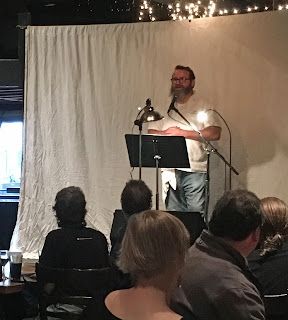 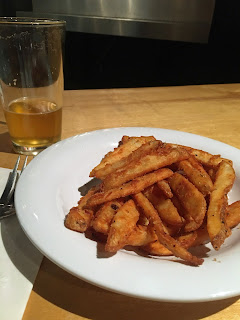 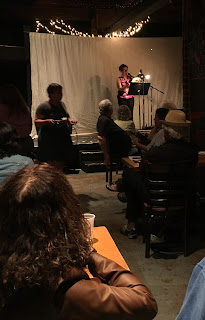 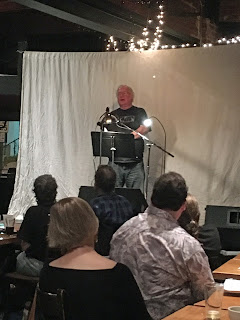 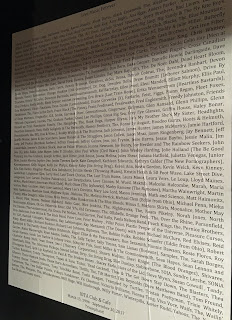 Sometimes I use this blog for serious things. Sometimes I don't.
& with that in mind, here's my latest experiment in cooking.... 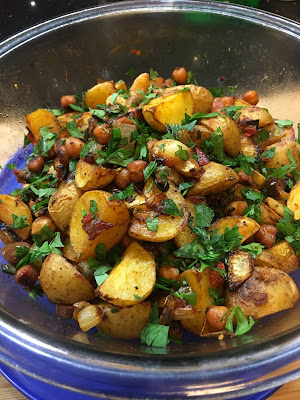 Lightly coat all with olive oil, salt, and paprika.

Spread onto baking sheets in a single layer. Set timer for ~15 minutes.

At 15-minute mark, turn potatoes and chickpeas and stir in olive-caper mixture, conserving any leftover "juice." Set timer for ~10 minutes.

At timer's ring (total cook time ~40 minutes), remove baking sheets from the oven. Add finishing twists of pepper and a sprinkle of parsley over all; I also added some Hungarian (hot) paprika. Add a bit of vinegar to the "juice" to make a dressing.