A Visit to Chestertown

On Monday I trekked out past Annapolis to visit the Rose O'Neill Literary House at Washington College in Chestertown, Maryland. (Founded in 1706, it was the major port town until Baltimore came along. These days it is a little on the sleepy side. A local bakery was pointed out as the hotspot.) I was honored read with Kevin Vaughn, this summer's Cave Canem Fellow), visiting all the way from Paris. I was also thrilled to be home-hosted by Jehanne Dubrow--I finally got to meet her dog Argos!--a great poet, friend, and the House's newly appointed director.

Thought you might enjoy a quick glimpse of the Rose O'Neill digs, which features a fully-functioning letterpress studio... 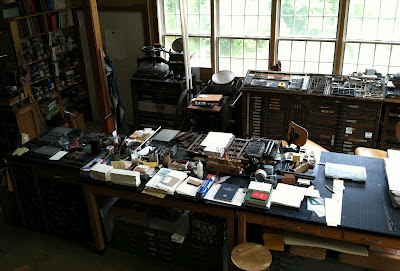 ...where students and faculty work together to make a many broadsides, including this edition of Nick Flynn's poem "Bag of Mice"... 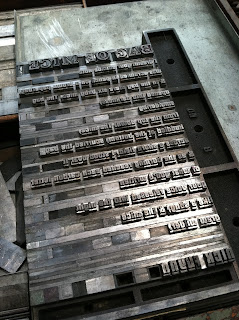 ...and where local artists have donated their talent to spruce up the walls, including this playful mural that depicts Six Degrees of Bacon--both Kevin and Francis... 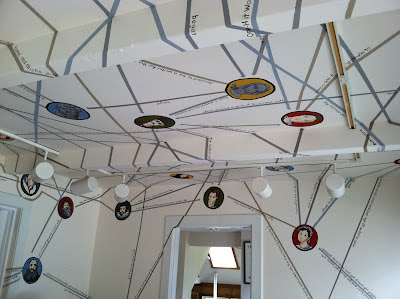 ...and where students can access a spiffy kitchen for snacks and cooking, provided the recipes have a literary bent. (Madeleines a la Proust, anyone?) 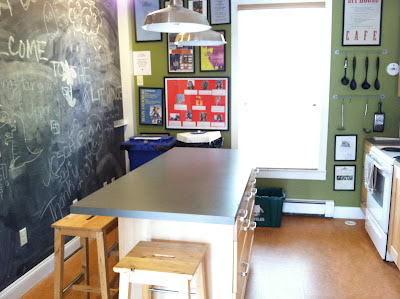 Seriously, what a dream haven. So many books! So many places to sit, read, write! 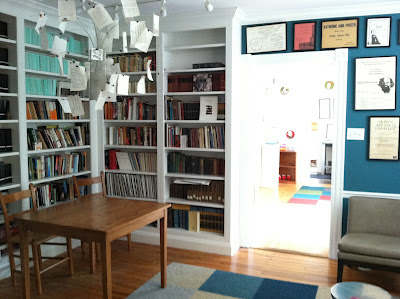 Our poetry salon was lovely--we began with music from the Pam Ortiz band, Kevin read from a long series-in-progress, and I shared a glimpse of the new manuscript. We had a big, friendly crowd. The editor of the Black Warrior Review was in the house, so I also read one of my sestinas, "The Platypus Speaks," which appeared in their journal.

Afterwards Kevin and I ducked out to the Hotel Imperial where he ordered us an ace concoction that substitutes Dewars' as the base for a Manhattan, sweetens with SoCo instead of vermouth, & garnishes with lemon and lime.

Now, off to the mountains for the Nightsun Writers Conference in Frostburg....
Posted by Sandra at 3:00 PM 1 comment: 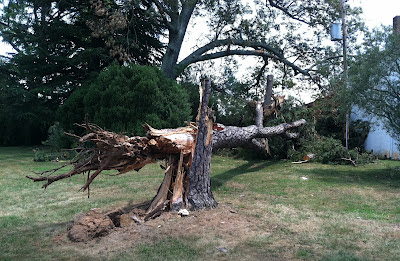 This past weekend I drove down to North Carolina, just south of Danville, for an important interview. On the way back I stopped off at my beloved Virginia Center for Creative Arts to take in the derecho damage, which they'd been reporting on over at the VCCA blog (including multiple days without power). The staff has been great, particularly Barbara Bernstein and David Garratt, who had to monitor the emergency generators for the kitchen--above and beyond the call of duty for artists in residence--and fellows rallied, trading in the usual serenity of the grounds for the bond of literally weathering the storm. 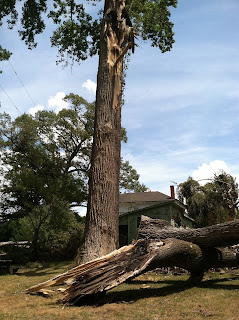 But there is no way around the devastating loss of trees. David took me around to the swimming pool, where derecho probably came roaring straight up from the hillside below. Mammoth poplars and ancient pines, wrecked. And these were not hollow trunks or deadfall waiting to happen--these were healthy trees in the prime of their multi-century lives. It was hard to see. In some cases the downed trees took others with them that otherwise would have survived the storm, the weight of one body breaking the other.


As David said, you can't help but develop an attachment to these sentinels, seeing them day in and day out. Shape begets personality: the proud pine the, voluptuous poplar. The practical naturalist in me knows that storms have been devastating forests for eons. But humans see thing on the scale of our own lifespans, and so this feels like a death in the family. You think the shade is gone. You want to gather it all up in your arms and sit for a long minute. 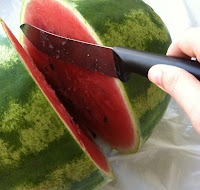 In Lynchburg, the closest major town to VCCA, I discovered a wonderful fresh farm market. I splurged on a big watermelon, tomatoes, bi-color corn, and a mix of heirloom beans. Hunkering down on the balcony to cut the watermelon, I missed Mississippi something fierce. I have fond memories of puttering around the Grisham House's mint-green kitchen, barefoot, listening to Sam Cooke or Valerie June, making do with hand-me-down knives and pots to fix a meal. Hacking hunks of watermelon off for Beth Ann Fennelly & Tom Franklin's kids while the grown-ups played bocce and sipped beer. Mixing beans and rice for the Hill Country Picnic. Roasting corn soaked in the husk (five for $1) to feed Ole Miss MFA students.

I fell asleep early last night, in the midst of a thunderstorm, and woke to 5 AM light. This was the view from my bed. I moved to this apartment in the midst of my own violent change, the cleaving of a life in two. Trusted sentinels were falling. I wasn't sure if I'd stay; I half expected to be in Mississippi by the end of the year. But, two years later, here I am, more in love with DC than ever. There is an alternate definition of cleave: "to cling or adhere," from the Old English cleofian and/or the Old High German klebēn, "to stick." When a hull splits sometimes it is a gesture of dying, and sometimes the revelation of something sweet inside, something to cling to. Either way, what is lost affirms what remains.
Posted by Sandra at 1:46 PM No comments:

Two Artists to Know About

I am grateful every day to be part of a community of incredible artists.

Josephine Durkin is in the home stretch of a Kickstarter campaign to raise $5K to create new work. We were on the same Odyssey of the Mind team in high school! We ran into each other at The Modern in Fort Worth, when I was in Texas for TCU's Ronald E. Moore Poetry Symposium. She has made a name for herself since our science & tech days--receiving an MFA in sculpture in Yale University and shows at places such as Virginia's Torpedo Factory and Texas A&M, where is currently on faculty. I love her work's emphasis on using "leftover studio residue," and I am proud to be a supporter (not to mention picking up a few rocking chairs in the process).

...and then there is Natalie E. Illum: fellow American University MFA student, mothertongue co-founder, renowned slam poet, guide to many Mercuries retrograde, kick-ass chick. In one poem she diagnoses a man with the words "I knew you were coming. / Broken comet / on a two lane highway / heading straight / for my clavicle." You can find her on stages around DC at such venues as the Beltway Poetry Slam or Story League. You might also spot the two of us having a drink at the Diner. This video captures some of her grace, talent, and toughness.

Things I Wish I Hadn't Worried About 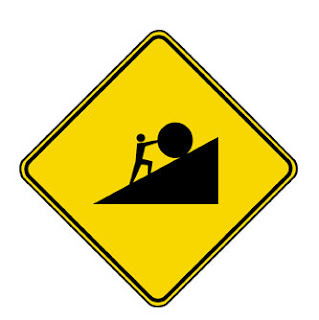 I love summer. I do. I love watermelon, and raw corn on the cob, and pulled pork BBQ. I love having time for live music again. I accept the trade-offs: calves speckled with mosquito bites, this sunburn on my shoulders after a Fourth of July baseball game.

These last two weeks have included hours of repetitive and recursive deliberations over things outside my control. I exhaustively imagine outcomes; I rehearse responses I'll never use. It's a bad habit but one, I suspect, not uncommon to artists.

So, historical perspective is a good idea. Dear Younger Me: here are five things you worried about that I wish you hadn't worried about so much.

-That B you'd have pulled if you hadn't dropped the class. UVA Reunions made me realize how much I missed by not taking classes outside English where, even if the grade had been poor, the info would have been rich. I'd trade my 3.8 GPA for the chance to learn about the Civil War and Galileo from those professors again.

-Getting your first book out as soon as possible. No one does you a favor by publishing your thesis as-is; it should marinate in the real world. With each year a writer accumulates friends, interested editors and reviewers, and contacts for readings. When people resort to blatant (and annoying) promotional efforts it is usually because they didn't build up enough post-grad community before publishing a book.

-Moving farther away from home. Life is long. What seemed like an unimaginable break in being close to Virginia family probably, in hindsight, would have been a blip.

- Making it work with a man who liked what he saw of you on the page/in theory more than what he saw day-to-day/in person. Love should not require dog-paddling to keep your head above the waterline of someone's expectations. You were meant to be in that relationship, sure. But you weren't meant to stay there.

-Opportunities falling through. Guess what? They will. Important emails go unanswered. People talk big talk to get a comp copy of your book, then are never heard from again. Meetings you rearranged a week for will be cancelled on a whim. Big payoffs evaporate. But you are not letting everyone down if something you got excited about does not happen. You only let them down if you aren't honest about it.

One could argue that worrying is a part of ambition. I don't begrudge that of you, me, or my younger self. But so many of those hours are probably better spent on a dance floor. I have never--not once--regretted an hour spent dancing in the summertime.
Posted by Sandra at 1:54 PM 7 comments: