I am thrilled to have another "XX File" in this Sunday's Washington Post Magazine, which you can read online by following this link:

All the best bars are haunted, and the one at Kramerbooks is no exception. But it's rare that the ghost has a name or that one remembers how his arm was tattooed with a plate from William Blake's "Songs of Innocence"....
Posted by Sandra at 12:49 PM 4 comments:

Cider Press Review, Defend Yourself If You Can

Because this story is going to spread like wildfire:

It has been too long since I immersed myself in the visual arts--usually a chance comes when I sneak off to a colony, but Sewanee was writers and nothing but. So this weekend I am hoping to go to the Torpedo Factory Art Center, a local institution where the Navy did, in fact manufacture torpedoes from 1918 to 1945. If the day is sunny I plan to take the Georgetown water taxi over and back, so I don't feel quite so guilty about being cooped up inside.

If you're interested in art that is a little less local, I'd like to introduce you to the work of Jessica Dunne. Jessica is familiar to many who have done a stint at Virginia Center for Creative Arts, where she regularly takes refuge from her home in San Francisco (though it's hard for me to imagine ever wanting to escape California). I was thrilled to see that Jessica finally got her own website up and running, where you can survey her big, light-obsessed canvases: 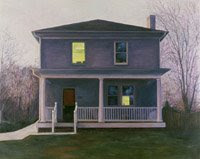 I am particularly fond of "The Office," which I recall her working on down on Mt. San Angelo; Alfred Corn pointed out one corner gutter-pipe that needed additional work! (It looks perfect now.) In addition to painting Jessica is also a printmaker, creating monotypes and spit-bite aquatints. I found this fascinating excerpt from a 2005 artist's statement on her process:

For the monotypes, I develop an image by dabbing etching ink onto a mylar plate with my fingertips, subtracting the lights with cotton swabs. I then print from the mylar onto a sheet of paper, and repeat the process over 50 times to create an image. The monotypes are really printed paintings: I make a single copy. The technique enables me to achieve a depth and subtlety of color that I have not found possible in any other medium.

The black and white "spit-bite" aquatints are yet another process. "Spit-bite" means biting the image with a combination of acid and saliva directly into a rosin-coated copper plate. The copper becomes the matrix for several identical prints--an edition. I find the fluid and painterly results worth the unsavory process.

Monotype and spit-bite aquatint combine the freedom of painting with the mysterious quality of printmaking, where ink is pressed into the paper as opposed to resting on the surface. In both techniques the final image is reversed from how I painted it, and contains unexpected marks and nuances. That unpredictability is what draws me to printmaking and, inevitably, sends me fleeing back to the relative comfort of painting.

A few years ago the Gettysburg Review devoted their covers and a portfolio to her work. (An aside--I feel like this GR website is looking dated. Is it an archive? Is there a newer one?) At the next AWP, you might look through the Review's 10-year anniversary collection of "back issue" artists, which I believe was produced as a limited-edition fundraiser and uses good, glossy paper comparable to any art catalogue. Her work is in there, along with some very talented others.
Posted by Sandra at 2:32 PM 2 comments:

"The Hotel Devotion" is up at Linebreak, with a stellar reading courtesy of Katrina Vandenburg. I met Katrina at the Sewanee conference, so this is a particular pleasure. You can find out more about her own amazing work by looking up her first book, Atlas, published in 2004 by Milkweed.
Posted by Sandra at 2:18 PM 4 comments:

Big love to Amanda Hess for featuring me in her ongoing City Paper series, "What's Your Problem?" I talk about the perils of sharing one's personal life in print. It's a useful lead up to a rather harrowing story that will be an "XX File" in the Washington Post Sunday Magazine on August 31.

My favorite past "problem" was when the editors from Barrelhouse admitted that it is a little trickier to use Patrick Swayze as a titular mascot now that the "Dirty Dancing" star is battling pancreatic cancer. They'll persevere, though, since they "truly have a great respect for Patrick Swayze”--and if they don't do honor him, who will?

I love those guys.

Today I have nibbled on almonds, then grapes, then purslane (yes, I know it's considered a weed, "pigweed" specifically, but it's lemony and crunchy and I like it), and then...gummi bears. Lots and lots o'gummi bears.

The gummi goodness is left over from a reading I hosted on Wednesday, in my little apartment, featuring Mathias Svalina and Julie Doxsee. Mathias and Julie are working their way up and down the East coast--with Mathias having traveled from Nebraska, and Julie all the way from Turkey. Our little venue was more in the tradition of a house concert than a big bookstore shindig (that said, I tried to sweeten the pot with "Washington, DC" shot glasses and keychains...it's all about the swag). Fans were oscillating, people were sitting on pillows, and a variety of beers were to be had.

I enjoyed the work of both poets, and in that spirit I'm going to share a couple of poems from books I bought that evening:


Skull in the cradle of a
lap, a valentine arm
appears quietly in June.

Together on the table
in two identical base-
ments, the fevers of cold


A little boy cut a circle
out of yellow paper
& this became the sun.

The little boy laid
a sheet of blue paper
on the floor & this
became the oceans.

The little boy cut
a daisy chain of people
out of paper & hung
it on the wall & this
became humanity.

It was nice for a while.
The people were happy
to just exist, they liked
the sun & the oceans,
they liked talking to people,
they liked how the wall felt
against their backs.

Eventually they tired
of hanging on the wall.
They wanted these things:
to swim in the oceans,
to tan on their backs,
to talk to more than two people.

They passed their plan
along the chain of people.
On the count of three
they would all pull their
arms & legs in, ripping
them all from each other.

On three they all pulled.
It was the first ripping sound
the world ever knew,
this world used to cutting.

It worked. The people
fell from the wall. Some
fell in the oceans, waterlogged
& sank to the bottom. Some
drifted near the sun
& burned up. Most fell
on the earth, but realized
that they were paper
& incapable of mobility.

They stayed in the spot
where they'd fallen. Those
lucky enough to have fallen
near each other talked constantly.

All they talked about
was how they missed the wall.

Mathias is the kind of guy who hugs you the first time you meet him; it was definitely a warm, welcoming vibe for the evening. Mover-and-shaker poets were in the house and I got to have longer and lovely conversations with Maureen Thorson, Bernie Geyer, and Charlie Jensen, our newly minted/transplanted director of the Writer's Center...where I have been newly recruited as a Board Member. Hmmm...suspicious coincidence, eh?

Thanks to everyone who made an appearance. Having had my test run of the air conditioning, I can invite an even bigger crowd next time.

Afterwards, I quickly loaded the dishwasher, did a little sweeping of crumbs, and hurried out to have a scotch with the poets (and a couple of Mathias's local friends) at Kramerbooks. I got to ask Mathias a bit more about Destruction Myth, a full-length manuscript that incorporates many of the "Creation Myths" and will be published by the Cleveland State University Poetry Center. That book is going to kick ass, mark my words. If you are in doubt: go back and re-read the poem above.
Posted by Sandra at 4:49 PM 2 comments:

Feist filmed a guest appearance on Sesame Street.
Posted by Sandra at 9:34 AM 1 comment:

At 8 PM on Monday I am reading at the Shirlington Busboys and Poets, which is located at 4251 S. Campbell Ave Arlington VA 22206 (a large complex that includes Signature Theater, with plenty of parking nearby). Kathi Morrison-Taylor will be our host, with an open mic to follow the featured reading.

Come on out! It's going to be low-key and fun. I may or may not throw a few sestinas onto the set list...
Posted by Sandra at 2:40 PM 2 comments:

This interests me if only because it is an unusually ambitious form of programming to be hosted by a literary magazine...

The Georgia Review, the award-winning literary quarterly published from the University of Georgia and distributed nationwide, is sponsoring the Pulitzer Legacy in Georgia program—a four-day celebration of fine writing and writers hosted by the Jekyll Island Club and running from October 27th to 30th, 2008.

The event features four recent Pulitzer Prize winners, all of whom have an association with Georgia, the University of Georgia, and/or The Georgia Review:

Each author will participate in a variety of activities over the course of the week, including readings, panel discussions, question-and-answer sessions, and informal gatherings with attendees.

Check out their website www.thegeorgiareview.com for details...though I have to say, the $500 cost (! and that's before lodging) will be a dealbreaker to most. They must intend this as a charity fundraiser of sorts.
Posted by Sandra at 11:44 AM No comments: