Refreshing Your Journals in the New Year 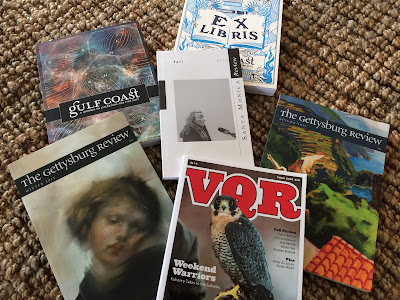 Like most folks, I have my handful of New Year's Day traditions. I simmer up black-eyed peas with greens for luck. We make a batch of Bloody Marys. I update my address book, write cards, and maybe have a few friends come by.

I also look around my one-bedroom apartment, in which my writing desk has to double as our dining table, and think, How can I clear out to create space for the new year?

If you're a writer, journal subscriptions are probably part of your world. We buy them to show our support for the editorial aesthetic, or because of an exceptionally fine bit of AWP swag, or because subscribing was built into a context fee. I get a half-dozen literary journals at any time, with slight variations from year to year--Gettysburg Review and Gulf Coast one year, AGNI and Georgia Review the next--plus comp and contributor copies. That's a whole lotta paper that comes marching into my mailbox.

When to read them all?

The truth is, most of my favorite journals are too bulky to grab for a Metro ride or stick in a carry-on bag. At the end of a long day, I'm more likely to reach for Real Simple, Washingtonian, or one of the other glossy mags that live on our coffee table. Sunday mornings are reserved for the New York Times. I have two books to read for teaching to students, another on the horizon for book club. I say to myself I want to save that issue for when I can give it the time it deserves.

So, the stack grows higher. And higher. Eventually, the prospect of reading transmogrifies from "anticipatory pleasure" to "looming guilt trip."

A few years back, I decided enough was enough. Here's my strategy:

-On or about New Year's Day, I round up all the unread journals in my house from the year before. There's usually at least six, and as many as ten.

-I give myself permission to leaf through, to skim, rather than reading everything. But when I find something I particularly love--an essay, poem, or short story--I flag it. The goal is to find one piece per issue, two max. Then I use the Contributor's Notes to find an email address for each of the authors. Sometimes this isn't possible, but there is usually an academic or other professional affiliation mentioned.

-The note! This is the best part. I keep it short and sweet, because I don't really know anything about this person (and vice versa). But I take the time to say I loved your piece, and maybe here's why. I say If you come to DC to read, please let me know. I say, particularly if it isn't someone with a book out yet, Please keep writing.

Sometimes I never hear back. Sometimes it is exactly what that person needed to hear. Sometimes quick notes turn into real, substantive correspondences.

The bonus: I can give myself permission to scootch these journals out the door, because I have honored the work. Which makes room for a new year of journals.

There's much meditation, at this time of year, on how we spend our time. I see a lot of people swearing off the internet, or turning email auto-replies on. But my online silences of the year past (some involuntary, some intentioned, some accidental) have only strengthened my sense of being a writer who thrives on engagement. Thanks for keeping an eye on this space. A flurry of end-of-year emails is just one small way I can give back to a community that offers me so much in return.

One other thing: Don't forget the jalapeño in the black-eyed peas.
Posted by Sandra at 1:44 PM 9 comments:

2015 was a more complicated year than expected. Everyone in my world was doing the heavy lifting of preserving finances, battling illness, and trying to focus plans for the future. I didn't spend time where or how I thought I would. Some things fell through.

I refuse to be permanently daunted. I might sleep in a few days more darkened winter mornings than necessary. I might fall off the internets for a month or two.  But my takeaways to 2016 include a happy, healthy kitty (at last!); a collection of poetry bound for paperback; and a busy schedule of spring readings and travel.

I want to write essays. I am ready to write essays. But first and foremost, I will always be a poet--and I'm so, so grateful to everyone who spent time with Count the Waves this year. That includes the painter who sent me a snapshot of my book sprawling on his Persian rug,  and another of his "inner flamingo" navigating the palm fronds outside his home. 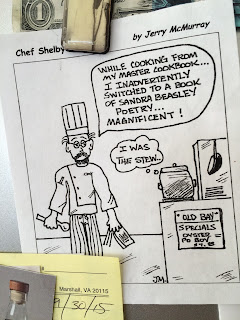 That includes the incredibly talented cartoonist down in Florida who sends funny, empathetic stories, who has shown me how poetry touches a life shaded in hardship. It has been years since I had a pen-pal. (My last official pen-pal-ship ended badly, when I tried to send her a gift--a hand-wrapped, decorated pencil--which got caught up in the USPS machines and shredded. Took two months for it to bounce back as "DAMAGED." She didn't realize I'd tried to reply and, hurt, fell into silence. I was 12.) That also includes the US Army JAG officer who, because he is used to the strange angles and compressions of writing in code, was drawn to the Traveler's Vade Mecum series. "I am [5450]," led off his note. 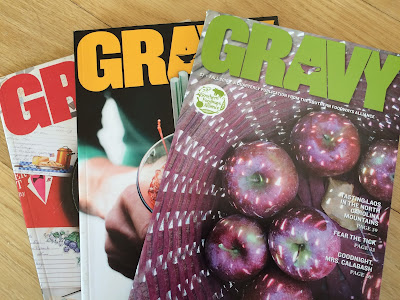 That includes the community of the Southern Foodways Alliance, which has been publishing my poems about Southern culinary traditions in their quarterly journal, GRAVY, which was honored with the 2015 James Beard Foundation Award for Publication of the Year. Our found rhythm includes working with artist Natalie K. Nelson, who has a great sense of humor. Her illustrations illuminate. The downside is that sometimes I worry that the "poetry world" doesn't realize I'm even writing poems. The upside is in October, I went down to Oxford, Mississippi, and read for an audience of restauranteurs, chefs, farmers, food purveyors and lovers. The experience was honestly the highlight of my year, entirely outside of any literati-industrial complex. 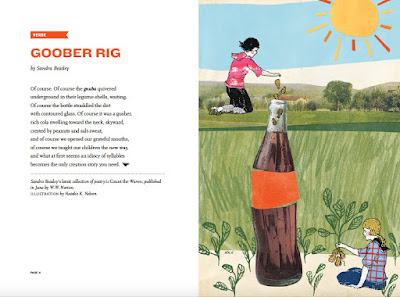 If there is a writer who has meant something to you in the past year, I can't say this loudly enough: reach out to her or him. Let authors know how their work, old or new, touched you. Sometimes such notes can be the lifeline in an otherwise impossible day.

I had a conversation the other night about that haunting question, "What's next?" We always hear it as judgment, e.g., What you've done so far is not enough. But it really is a vote of confidence. What's next? Everything. One word at a time.
Posted by Sandra at 5:49 PM 3 comments: