April is always 30 days of crazy, and not just because of National Poetry Month. It's the month taxes are due; the month students panic about the final projects looming ahead; the month when warming temperatures inspire a smile--that quickly turns into a sneeze, a sniffle, then a wheeze, as all my pollen allergies kick in.

This year, April includes the lovely madness that is the AWP Conference. If you're going to be in Minneapolis, please consider joining us at the Best New Poets 10th Anniversary Reading on Friday morning. I'm also excited to take part in Tate Street's extension of the Favorite Poem Project, part of the initiative launched by Robert Pinsky during his tenure as Poet Laureate. I'll be talking about Elizabeth Barrett Browning's "How Do I Love Thee? (Sonnet 43)."

Browning's sonnet--or rather, a purposeful mishearing of it--gives Count the Waves its title, and the opening line serves the book's epigraph. With June 1 publication on the horizon, I'm trying not to fixate on the fact that a handful of Advanced Review Copies are out in the world. My poems are in the hands of some powerful writers and editors, who might like them (or not), who might take them on for review (or not). Will the Traveler's Vade Mecum series make enough sense? Are the acrobatics of a sestina too irksome? Did I get the order of those last five poems right?

I'm trying not to fixate on it, but I'm failing. So it is an incredible gift to see my book given an advance mention in the summer issue of American Poets (the handsome pub of the Academy of American Poets). Here's the item: 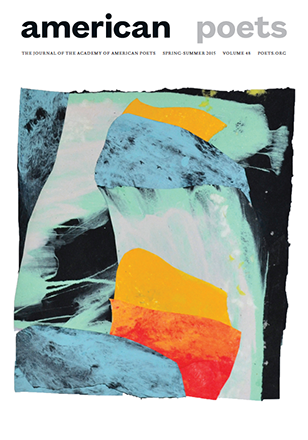 Sandra Beasley's third collection negotiates a tense interplay between intimacy and distance, the gloss of fable and the coarser edges of lived experience: "What the parable does not tell you / is that this woman collects porcelain cats….This man knows they are tacky. Still, when the one / that had belonged to her great-aunt fell / and broke, he held her as she wept … // The parable does not care about such things." Ostensibly conversational in tone, Beasley's lines are crisp and propulsive with verbs, as they examine beauty in a new way: "No one // ever praises the ass of the peacock, grin of quills that does the heavy lifting." Such whimsical turns belie a spiritual devotion and the overall effect is suggestive of an illuminated manuscript: "The seams of our gold world weaken … Steady the hand that dares mend a sky." Beasley's poems also examine the notion of sacrifice, and look beyond easy or pleasing endings.

So much of this review gets at the heart of what the book is about; I particularly love the idea of an "illumined manuscript." Deep breath. It's foolish to be in a hurry for the finished book to arrive, because there is so much to be done between now and then. I've got a tour to plan, and a website to redesign. But my heart's a racin' towards June 1.