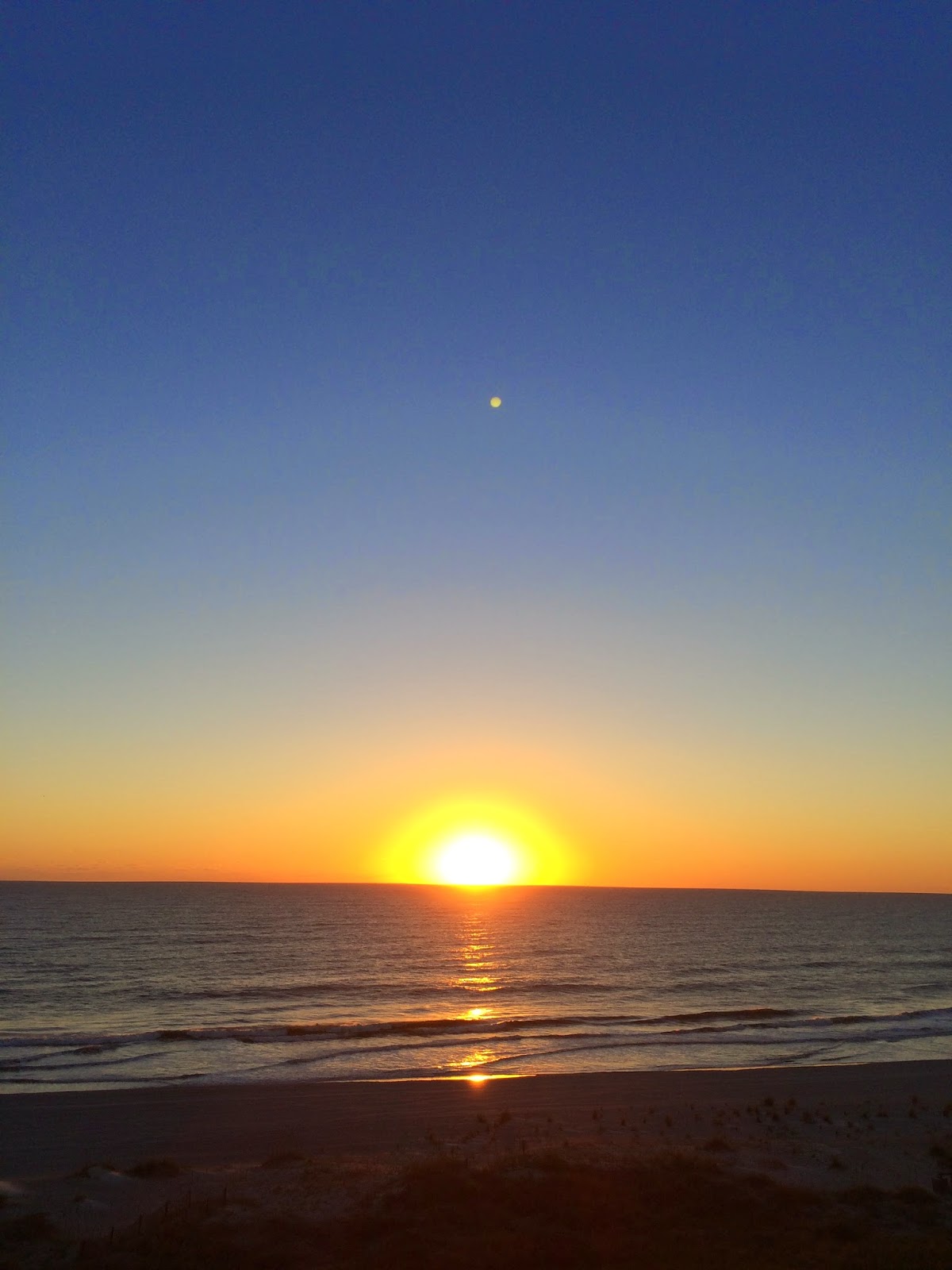 Hard to believe that two weeks ago, we were watching the sun rise over Amelia Island. Now all is wet leaves & heavy clouds in DC. I'm heating up a pot of posole, so rich and thick that I'll eat it with a fork. Later, I'm taking part in a reading of Edgar Allan Poe's "The Raven" down in Dupont Circle, thanks to Kramerbooks. In other words: autumn. 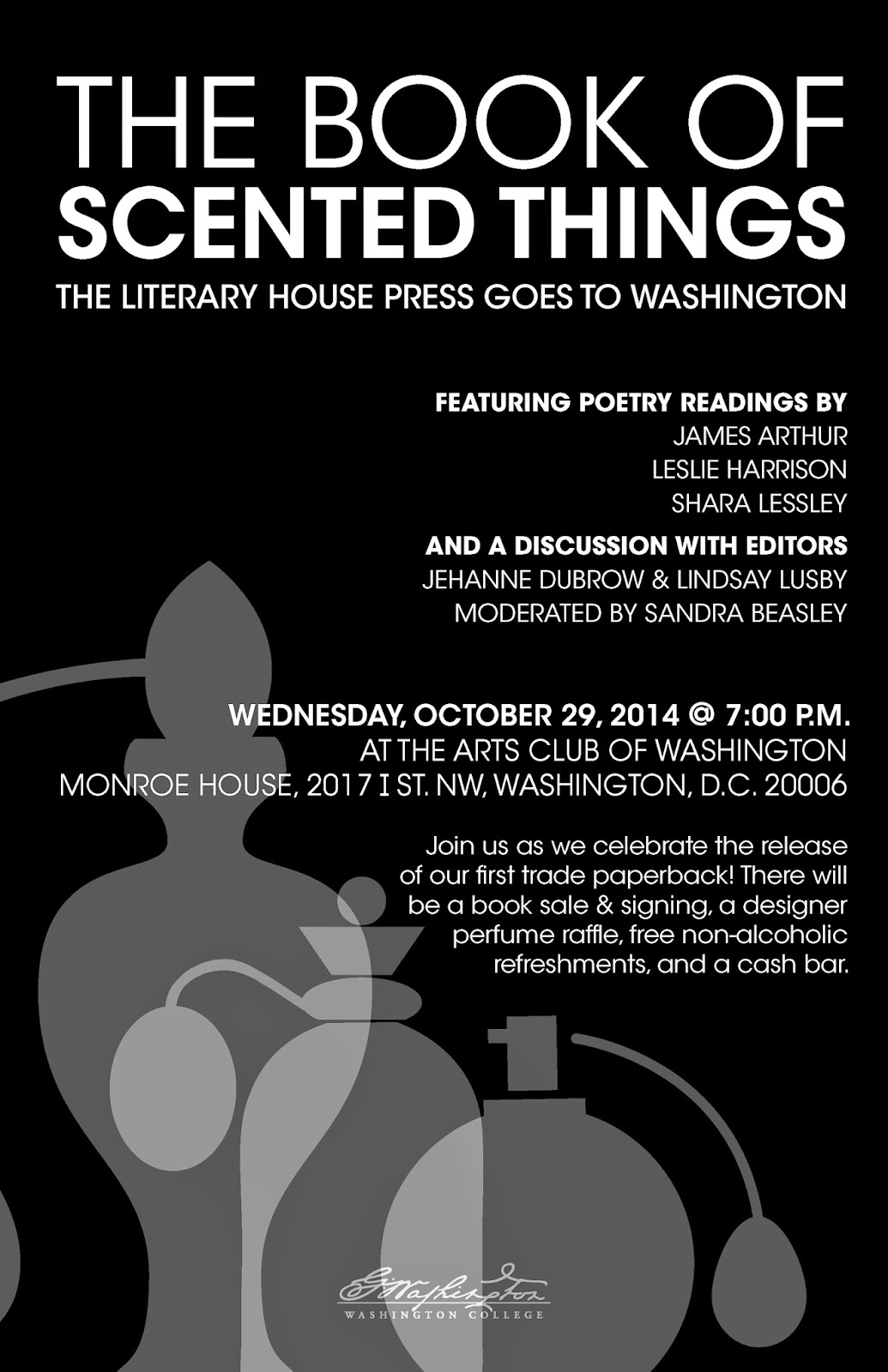 Good things are happening in DC. Graywolf is bringing a quartet of poets to the Folger (or to be precise, across the street from the Folger) on Monday, October 20. Poets & Writers is hosting a daylong event on independent publishing, with panels and roundtable discussions, at the Library of Congress on Saturday, October 25. Ambitious folks might then dash over to Dance Place that same evening for The Ghost of DC Past: An All-star Spoken Word Reunion. On Sunday, October 26, there is a release party for Mathias Svalina's Wastoid, published by the good folks of Big Lucks, at The Big Hunt. Amidst it all, a shameless plug--I'm hosting a reading at the Arts Club of Washington on Wednesday, October 29 for The Book of Scented Things. This anthology puts together 100 contemporary poems about perfume, solicited from writers across the country, and it's the first volume designed and printed by The Literary House Press (based out of the Rose O'Neill Literary House at Washington College). We'll hear from contributors with their poems, editors Jehanne Dubrow & Lindsay Lusby will answer questions, and they'll raffle off a designer perfume. A veritable scent-topia.

Oh, and on Wednesday, November 5, there is a doubleheader at American University: journalist Ta-Nehisi Coates (7 PM), and poet Patricia Smith (8 PM). Seriously now.

At 4 AM, I got up to scribble down ideas for an essay. Counting through this morning, I've reached critical mass for some kind of prose book. But what kind? I'm picking up threads from nonfiction projects I thought I might write over the last few years, but being a little more honest about where my life is now, and what I have to say. When Stephen King titled On Writing, he added the subhead, "A Memoir of the Craft." I love that notion of writing in a way that is analytical, attentive to form, and yet also interweaves the personal. I have different obsessions to attend to than King, and no great anecdotes of coke-binge drafting sessions; no Firestarter or Carrie on my shelf. Yet there's something here.

The manuscript will be a long time in the making, I suspect. It used to be that the prospect of starting a project that I didn't think could be completed within months had no appeal. The MFA / thesis experience coaches us to force a book into being, and that's a perfect match for a deadline-driven writer such as me. Even when I sold Don't Kill the Birthday Girl, I vouched that I could finish it in a year, with only 20 pages in hand. But now a longer-term project feels welcome, like a promise to myself. When you're making a good soup, you have to be patient. That's what complicates the flavor.

Perhaps that's a lesson learned with Count the Waves, which has a poem in it dating back to 2005, a poem greatly improved in 2014 by the edits that I figured out (finally!) needed to be made. I am so thrilled to finally have CtW's cover in hand, as well as a firm pub date--June 1, 2015--and the knowledge that it will be hardback, 96 pages or so. Peekaboo: 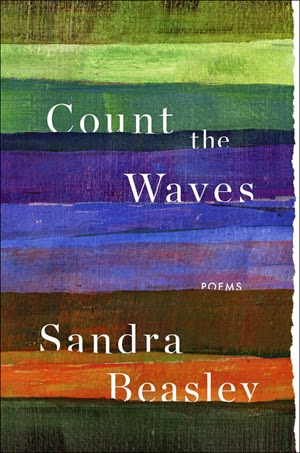 This is not what I thought I would be posting about today.

The Meadville Tribune has reported that Kirk Nesset, professor of English at Allegheny College and a familiar face to many of us in the creative writing community, is scheduled to appear in U.S. District Court in Erie later this month for a preliminary hearing on federal child pornography charges. He does not deny downloading child pornography to his home computer. The entire article is available here.

An article in the Pittsburgh Post Gazette adds that in the affidavit, he expressed "a preference for girls ages 10 to 13." He confirmed plans to resign from his teaching position. The entire article is available here.

As I write this, we share 710 "friends" on Facebook, which essentially represents our overlap in the writing community. Many of those writers are parents who unhesitatingly post snapshots of their kids in various stages of dress. They deserve to know, and so I will link to this on Facebook. But that felt like an inappropriate place to make a primary post of some complexity and length, which is why I'm using my blog.

If you attend the annual AWP Conference with any regularity, you've probably seen Kirk Nesset. He's memorable because he carries his mini-Pomeranian everywhere. I read with him for a literary journal panel a few years back, and we've always been on friendly terms; I admired his tenacity in creating opportunities for students to travel.

There's been anxiety and anger in our community as of late because of transgressions--some alleged, some confirmed--of one writer against another, with accusations that a cloak of protective silence has come down around the perpetrator due to his or her popularity and/or influence. I've stayed out of it. That choice, I realize with some embarrassment, is a luxury of not knowing any of the parties involved. I have no such luxury here. I have implicitly endorsed Kirk by making friendly introductions over the years; I have offered explicit endorsements by sending students his way.

This poetry world thrives in part because of the little-bigness of it, the sense that we're all in this ridiculous, sublime, entirely un-lucrative adventure together. This isn't just a common profession; it's a tribal affiliation. How many couches have I crashed on, vulnerable, at the houses of people who I'd only known for the length of a reading?

When my younger sister got stranded in Seattle for a night earlier this year, I called the first poet I could think of in that city, knowing I could trust her to his family's care. (And I was right! He made her midnight pancakes while she shared the details of a harrowing day.) I joked to my husband that I'd activated the "Emergency Poets' Network," but it wasn't really a joke. We watch out for each other.

There are many ways that the consequences of these type of charges may be mitigated. Even a jail sentence does not equal banishment. People can and do re-emerge. I'm writing this in part because if we ran into each other at some future AWP Conference, I might be tempted--caught off guard, on the fly--to take the easy route of smiling and waving. Because hey, those terrible things that happened a few years back wouldn't feel relevant in that very moment, right? Wouldn't it be easier to just smile and wave? Wouldn't it be okay?

Not okay. Another writer might see that gesture, and think Oh, she knows him. Might then feel comfortable letting his or her child pet the nice man's cute dog. Might not mind when he snaps a photo or two.

In Matt Bai's recent cover story for New York Times Magazine, he quoted former senator Bob Kerrey: "We're not the worst thing we've ever done in our lives, and there's a tendency to think we are." As Bai observed, those words should be posted on the wall of every newsroom, and are relevant here. I'm not sharing this with any vigilante joy. If it weren't already at the level of public record, I would not share it at all.

I am sad for Kirk, who has often shown he is capable of kindness and generosity, and for the reality that his professional accomplishments will be overshadowed, in the coming months and perhaps for years, by this massive violation.

It's important to note that the Black Forest Writing Seminars has severed all ties. Kirk Nesset will not be a part of their Summer 2015 program. There's an amazing roster of talent lined up, and director Deborah Reed is happy to field questions.

I love the poetry world. I really do. It's an automatic, unguarded love that I might outgrow someday but not yet, not yet. When I go to a new town, I like to find the poetry shelf of whatever the local bookstore is and run my fingers along the spines like I'm thumbing the pages of a yearbook, looking for any name I can match to a face and conversation. The eccentric good-ness of this writing community has seen me through many a dark night.

We owe it to each other to shepherd that goodness, and that means recognizing when something has gone very wrong.
Posted by Sandra at 1:42 PM 6 comments: