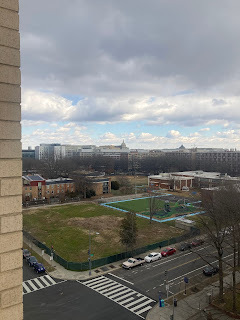 If I stand in the right spot of our ninth-floor apartment, I can see the Capitol. I looked this way a lot during the past week, anxiously checking for smoke or other signs of distress that might interrupt the days around Inauguration  My gaze cuts across the vacant lot at 501 I Street SW, bare grass that has been the site of a hotly contested development plan since we moved to this neighborhood in 2015. If approved, the plan calls for a nine-story mixed-use building, and the Capitol will disappear. Never choose a place for the view, my neighbor reminds me.

When I give readings from my books, I am sometimes introduced as "from Virginia"; other times the host says I'm "from DC." Neither feels wrong. This is my sixth rental since first moving to Dupont Circle in 2002. I spent eighteen years growing up in northern Virginia. I’ve lived in Washington, DC, just as long and almost longer. But I’d never say that I'm "from DC" on DC soil, not after having been asked—not unkindly, but firmly—So what quadrant were you born in? Which hospital? 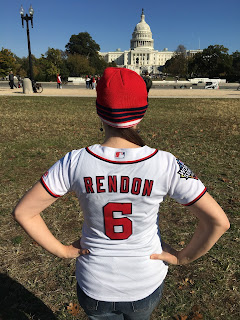 The vacant lot in my sightline used to be Southeastern University, founded in 1879. A little further over was once 4 ½ Street SW; Myra Sklarew, my teacher at American University, wrote of her grandfather posing for a photo outside his home there back in 1913. The Titanic memorial hovers at the corner where Fort McNair meets with Southwest Waterfront Park, forever mourning those lost at sea in 1912. To live in this neighborhood is to box with one’s ghosts. My dad drove us along Hains Point to see The Awakening clawing out of the ground, back before they moved the sculpture to National Harbor. My Grandma Beasley gathered us for the Thanksgiving buffet at Phillips Seafood. My Grandma Pruett hummed along to the melodies of Arena Stage’s musicals. Here is where 22-year-old me roamed the Environmental Protection Agency building, destined for demolition and taken over in the meantime by Art-O-Matic in 2002.

My first Southwest address was a building designed by I. M. Pei, and the second a complex by Chloethiel Woodard Smith. Both were key figures in the 1960s urban renewal movement that turned this neighborhood into a Brutalist toy-box of beautiful and, today, dilapidated forms. Their buildings also displaced thousands who couldn’t afford the new reality. 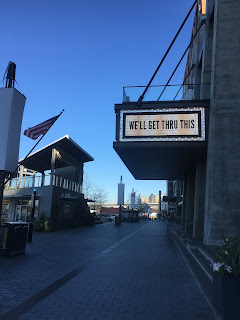 Sometimes when describing Southwest Waterfront, the other person interrupts—Oh, you
mean the Wharf?—and I wince, caught between waves of gentrification. The pandemic has complicated my feelings toward this multi-million dollar behemoth. Restaurants where I couldn’t afford to a sit-down meal converted their pantries to bodegas that sold chicken, carrots, onions, and greens. The fancy liquor store distributed locally distilled sanitizer. When I first read The Anthem’s sign, “We’ll Get Thru This,” my immediate thought was: Okay then. We will. I needed to have someone say it. I needed for someone to spell it out in foot-tall letters.

Still, the city’s ghosts pull no punches. This past April, when it didn’t feel safe to go out, I could step out on the balcony and see cherry trees blossoming along East Potomac Park. I took great comfort in that. Now Washington Channel is disappearing, floor by concrete floor. Fifty years after our own building went up, I understand the irony of complaining about new construction or rising rent. I can still glimpse the water, if I stand in the right spot. 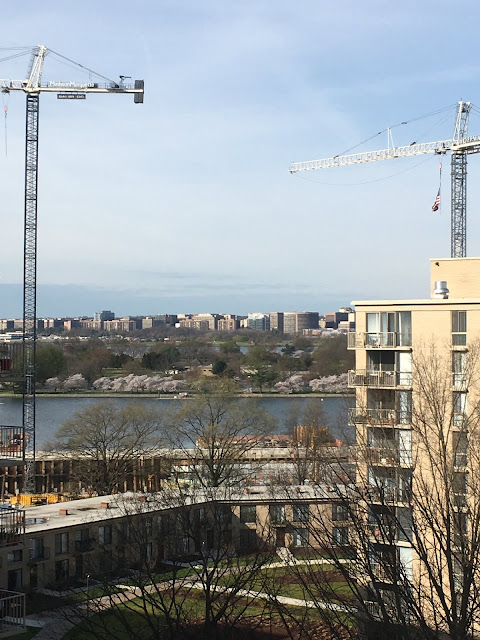 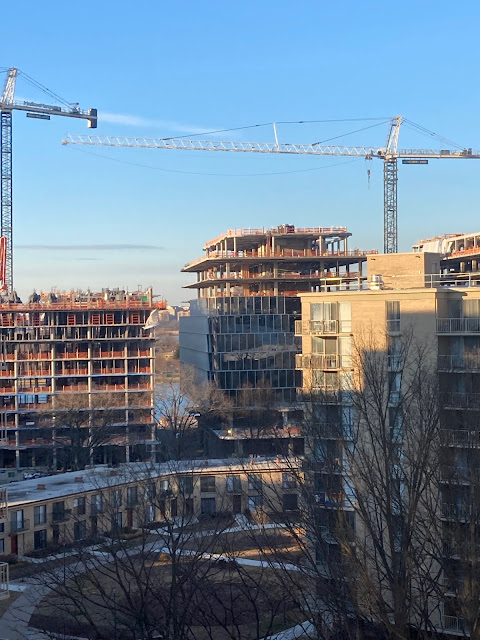 In just a few weeks, Made to Explode, will be published with W. W. Norton. The collection (my fourth!) has a whole section of prose poems that interrogate the strangeness of our monuments and memorials, our "living history, plus a sestina called "American Rome."  There are lots of things that I am unsure of, but one thing I do know is that DC is the right place to be as this book enters the world. I'm particularly excited that Politics & Prose is using it as the February pick for their Signed First Editions Book Club, because that will put the book into the hands of some Washingtonians who may not usually reach for poetry.

Vienna is where my family is. Hyattsville is more affordable. Yet this neighborhood holds me, this peculiar cauldron of personal memory and cultural history just blocks from the National Mall. Maybe I won’t ever get to be a Washingtonian; maybe that was decided the moment I was born at Inova Fairfax Hospital. But I am here now. I choose DC for the view. Not a literal vantage point, or one particular set of windows, but because I am invested in what has been and what might be to come.