A Book Is Born 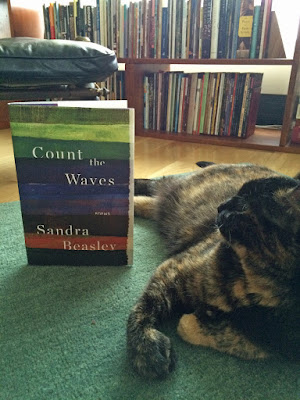 …and a kitty has landed.

On Sunday, we brought home Whisky (a name her foster parents wisely adapted from the original name, "Whizzer"). This sweet Tortie was brought to a shelter after her owner for the first eight years of her life passed away. Whisky is a Hemingway cat, polydactyl on all four paws, meaning I'm going to have to figure out how to clip 22 claws every six weeks. She's worth it.

On Monday, Count the Waves was officially released into the world.

When I first drafted "The Wake" at Virginia Center for Creative Arts back in 2005, inspired by the Venetian prints of James Abbott McNeill Whistler, it felt like The Little Poem That Could. John Poch awarded it the Elinor Benedict Poetry Prize from Passages North, which was a breakthrough for me. The $1K prize came at a critical time, and helped me convince my family that writing could be a career as well as a creative outlet. Yet I knew the poem didn't fit in with the searing biographical material of Theories of Falling or the funny, freewheeling poems that would become I Was the Jukebox. I resisted shoehorning it into either book, and told myself, "the right manuscript will come along to hold this."

It would take a decade of life experiences--some thrilling, some fraught--several heartbreaks, and thousands of miles of travel in order to create that manuscript.

It wasn't until 2013, when I was living for a semester on the campus at Lenoir-Rhyne University in Hickory, North Carolina, and began working on another multi-part poem, "The Circus," this one based in artwork by Henri de Toulouse-Lautrec, that "The Wake" found its counterweight. Then a series inspired by The Traveler's Vade Mecum won the 2013 Center for Book Arts Chapbook Prize, thanks to Harryette Mullen and Sharon Dolin. Shuffling and re-shuffling the pages, I began to understand how these disparate elements were strangely necessary to one another.

The "waves" of the title--a mishearing of Elizabeth Barrett Browning's "How do I love thee? Let me count the ways"--refers to the Adriatic Sea coursing under the Ponte di Rialto, to the generations of women writers and feminists that have come before me, to the oceans we put between us, to the currents off the shore of Kauai, to the iterative energy of a sestina's endwords. Thanks in particular to my patient preliminary readers Maureen Thorson, Kyle Dargan, Hailey Leithauser, and John Casteen. They watched me wrestle with how to, as one poet put it, "braid a series of series."

Count the Waves ultimately embraces its pairings, such as "The Wake" and "The Circus," but isn't afraid to displace them slightly, which is why "Fidelity (II)" comes before "Fidelity (I)." If there's one thematic through-line, it is the journeys we take toward pairing with each other. And how we dis-place ourselves along the way.

If you like my work, if you believe in my voice, please support this book. Here's how:

Publishing a poetry collection is not unlike giving your heart to a cat. You buy the healthiest food, the softest bed, the trendy water bowl with circulator. Everyone offers all kinds of advice. You put forward your affection, and you wait. Sometimes you're rewarded with attention, purring even. Other times you get a diffident stare.  You sigh, because you're learning that there is only so much you can control in this life. Tomorrow is another day.

If there were magical literary catnip that I could sprinkle over these pages, I would. But all I can do is trust the poems--and you. I hope you enjoy Count the Waves.