A Tale of Two Octobers

"I usually love October," I said, "but this one is really kicking my ass."

She laughed. "...And it's only the first week of October, right?"

This is a tale of two Octobers. There is an awesome version of this October. I am thrilled to learn I've received an artist fellowship from the DC Commission on the Arts and Humanities, which will support work in the coming year. I confirmed that I'll serve as a Distinguished Visiting Writer in tandem with an early 2017 residency in Florida. I got to travel to Michigan and St. Louis for readings. 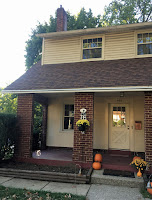 The trip to Central Michigan University, in particular, was amazing. I had two sets of home-hosts: first in Akron, Ohio, and then in Mount Pleasant, Michigan. I live in a one-bedroom apartment in DC, and I'm conceivably looking at a lifetime of apartments. So the novelty of an actual home is not lost on me, complete with front steps for pumpkins and porches on which to leave your wet umbrella. In Akron, we went out for spicy Thai food and stayed up to watch baseball, the wildcard playoff game; in Mount Pleasant, we home-cooked a dinner of chicken thighs, potatoes, and kale, and stayed up late drinking red wine and discussing regional identity, accents, and the variable "South." 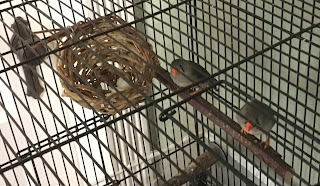 There was a cage of finches living outside office I was using as a guest room, and I quickly came to love the white noise of their chatter. 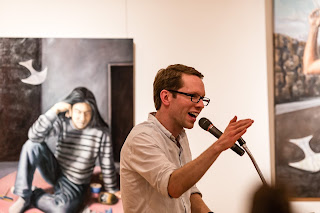 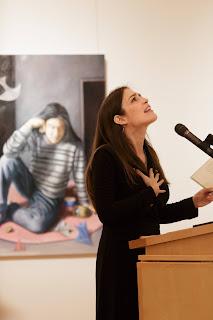 Jeffrey Bean (who everyone calls "Bean") is one of those poets who I immediately felt like I'd known forever. He's a passionate and beloved teacher, who trusted me with his undergraduate workshop for an hour-plus seminar on persona poems. The students were utterly on point with their ideas and interpretations. I spent an hour fielding nuanced, researched questions during an interview for a literary magazine. I got to read to a packed library. I read a few new poems. I signed copies of every book I've written; the bookstore sold out of I Was the Jukebox. Afterwards, we went out for cocktails and had some frank talk about poetry politics, conferences, and getting out there in the world. A woman who had attended the reading joined us, quietly picked up the tab for the table, and slipped out before we could even say thank-you. 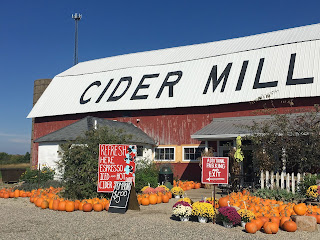 The cider, coffee, and apples at this farm stand were so good that I stopped off twice. I bought spicy Michigan salsa and corn chips made in Detroit.

This is what I think of as prime October energy.

But that's only one of two Octobers. In the other October, I got so behind on feedback for my own students that I wrote them letters of apology. In the other October, I've been waking up at 3:30 AM to do a round of emails, then grabbing 2-3 more hours of sleep after my husband leaves for work at 7 AM.  Half the time that then necessitates an afternoon nap. I missed an Arts Club members meeting, because I overslept. I missed an award ceremony, because I overslept.

I put together a 55-page application for a teaching fellowship that create some huge professional and creative opportunities. But if I get it, it would mean living in two places for nine months. So I'm both excited and terrified by the prospect.

The outlet adjacent to the table I use as a desk has pulled partway out of the wall, so my laptop is perpetually on the edge of running out of battery life.

I maxed out my entire family's data plan by accidentally leaving my phone's mapping function on during the drive back from Michigan.

We are six appointments in since August, and our A/C units are still not working. Technicians will be be back on Monday. And this rate, it is now about heating versus cooling.

My husband suggested a Saturday trip to Eastern Market would be a way to lift my spirits. I busted a brand-new tire circling to park the car off Pennsylvania Avenue.

The box of paperback books from my publisher arrived but they mistyped the address so it was delivered across the street. The box was already marked RETURN TO SENDER in black marker, and the woman was resolute. I had to show my ID and beg.

Last night a friend passed along a gag gift, a mug that says "What Deadline?" and it took all my reserve not to burst into tears.

I'm not cataloguing this because I'm looking for sympathy. (Though maybe empathy? I know your fall is going full-throttle, too.) These overextension moments are all of my own making. By hook or by crook, I will get through the next six weeks. I'm fixating on the handful of ways I'm coming up short versus the ways that (I hope) I'm being a good writer, teacher, and person.

But, man. October is kicking my ass. I thought, "Remember when there was a bunch of poet-bloggers, and we all had these spaces in which we confessed the downs as well as celebrating the ups?" And I kind of miss that, so here I am.
Posted by Sandra at 11:53 AM No comments: