To the Poets I Know 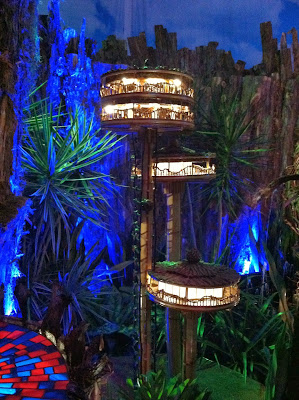 This year's display at the Botanic Garden was inspired by the World Fairs of years past. As usual, surreal & lovely; the one Christmas tradition I always make time for in DC.

I sent a few notes to poet-friends today--to stay on top of my inbox --and realized, for all the casualness of tone, how important certain writers are in my life. You may be one of the people I'm thinking about, even though we're not that close.

Maybe because I've known you for over a decade, before either of us published.

Maybe because you talk about iambics and power tools with equal enthusiasm.

Maybe because you answered your phone that time I thought you were still at AWP and let me babble about snarky conference weirdness before gently mentioning you'd already flown home, were in a different time zone, and needed to get some sleep.

Maybe because you advocate for social change, and you aren't afraid to argue, whereas I am non-confrontational to a fault.

Maybe because we always knock it out on the dance floor.

Maybe because you chose to go back to your hometown.

Maybe because you were really happy for me when I told you I'd won that prize, though I realized later I was accidentally breaking the news you hadn't won that prize.

Maybe because we share the realities of writing about the medicalized body.

Maybe because you're the most dedicated teacher I know.

Maybe because you were graceful that time I blanked on your name.

Maybe because you are a real pain in the ass, but you make things happen.

Maybe because you insisted on buying my book, though you already had a copy, so I could say I sold a book at the reading. And then you let me crash on your couch.

Maybe because even your promotional announcements are funny.

Maybe because you don't drink.

Maybe because you gave me the model, when I so desperately needed one, for valuing attention to my writing over starting a family.

Maybe because you stole Flat Langston.

Maybe because it could have been weird between us that one time and it wasn't.

Maybe because you show up at events all over the DC, Virginia and Maryland area even though I know you don't drive, which must means hours on buses and the metro.

Maybe because your poems are so dissonant and brave and musical they make me want to write harder.

O o o poets. I just like to know you're out there, doing what you do. Thanks for that.

And Shann Palmer, you will be missed. Her blog, "Shann Palmer Says," has a December 11 poem draft. The next day Shann had a heart attack, and never woke from the coma that followed. I remember giving a reading in Richmond, Virginia, at Fountain Books for Theories of Falling--except the printer hadn't delivered my first copies in time. So I was selling little handmade chapbooks of the collection's highlights, bound with curling ribbon, with a black & white print-out of the cover-to-be. Shann bought one. She was a funny, practical, salty lady--I think if I called her a dame she'd take it as the intended compliment--yet a woman of faith, as well, and song, and a talented poet.

Meet Me in St. Louis (or at Politics & Prose)

I always have so much I want to tell you.

"In the years leading up to his recent passing, Alabama poet Jake Adam York set out on a journey to elegize the 126 martyrs of the civil rights movement, murdered in the years between 1954 and 1968."

A year ago this past weekend, we lost the phenomenal poet and friend Jake Adam York. I'm so glad that we'll have one more chance to read new work from him--ABIDE will be out in March 2014, thanks to SIU Press and tireless editor Jon Tribble. In the meantime, tide yourself over with this interview in MEAD, and this signature poem, "Grace."

We miss you, Jake. 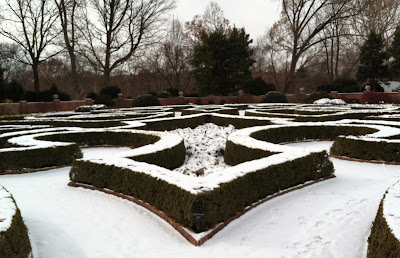 Last week I went to St. Louis for a reading with the Observable Reading Series. The flight out included hours on the runway, as DCA struggled define our relationship to the sleet (status update: it's complicated), the pilot sometimes changing prediction mid-sentence. Finally we took off, and as the air conditioning units cranked up the smell of de-icing chemicals flooded the cabin. The flight attendants gave us bag after bag of trail mix (and in my case, an illicit Dewar's), as what was supposed to be an afternoon flight slid past the dinner hour. I'm not skittish about flying, but I was glad to land.... 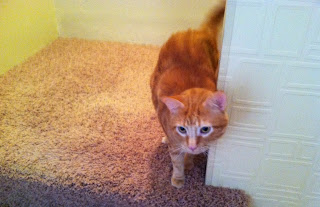 ...and to be promptly greeted by Steve Schroeder's cat, Ozymandias (Ozzy for short). Being home-hosted by people with cats may be one of my favorite part of being on the road. Steve is a co-curator of the Observable Series and he has a great new poetry collection out, The Royal Nonesuch. The next morning, I wandered the Missouri Botanic Garden for a bit, had lunch with a fellow poet from UVA days, and checked in at The Cheshire Hotel, which is kind enough to comp rooms for the visiting writers.

Good lordy. Apparently, in its prior incarnation this hotel was used for some of the cheesier scenes of Up in the Air. Also the pub lounge, Fox & Hounds, has been a long-favored dive bar for locals. But now the whole complex (which includes three separate restaurants) is refurbished and, while retaining just the right degree of tweed and embroidery and "old world" kitsch, The Cheshire absolutely glows with welcome. I spent hours camped out in front of the lobby's wood-burning fireplace. I stayed in the Robert Herrick Room, gathering rosebuds. Next time maybe I can snag the Ian Fleming Suite, which has a door that opens straight out onto the pool deck. The Cheshire joins The Highland Inn in Atlanta, and The Algonquin in Manhattan, of places where I'd like to be the writer-in-residence for a month, taking in the strangeness of hotel life. 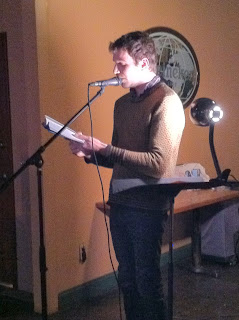 My co-reader was Paul Legault, author of several books including The Emily Dickinson Reader, which I bought that night; seemed appropriate on the occasion of Dickinson's 183rd birthday (she was born December 10, 1830). Published by McSweeney's, The EDR is one of the most physically handsome books I've ever held, with a center-aligned presentation of Legault's "English-to-English translations" for each of ED's 1,789 poems, as catalogued in the R.W. Franklin edition. The style and font add heft to a series of stichics that might otherwise be monotonous to the eye, and a gold ribbon is at the ready for you to hold your place; the collection invites a browsing pace. Periodically, we're greeted by a re-interpretation of the one iconic Dickinson portrait. The book closes with two indexes--one thematic and one of Dickinson's original first lines, which might be the only way some readers will recognize their canonical favorites.

ED's poem, "Hope is the thing with feathers-- / That perches in the soul--"

Hope is kind of like birds.
In that I don't have any.

...and so on. Don't read it in anticipation of any one "translation," because you'll probably find that singular instance a little easy or glib; that the index does not alphabetize Dickinson's first lines might be an implicit, wise discouragement of such behavior. Do read The EDR for the conversation across the whole, the wax and wane of surrealism punctuated with sentiment. Legault has a dry humor--this showed in his reading at Llywelyn's Pub, full of small asides and swallowed punchlines--that becomes a wet humor whenever any of the following topics arise: zombies, sex, sex with zombies, and Susan Huntington Gilbert Dickinson, Dickinson's sister-in-law, e.g. "Everything's better when you're naked. Take Sue, for example." (1361)

At first, I had mixed feelings about the use of "Sue," who is the object of this Emily's fiercest desires; it's a bit strategic, a way to give Legault's book narrative cohesion and dramatic arc as it hopscotches across a lifetime of poems. Occasionally, Sue feels like a fallback for dealing with ED's less inspiring poems. Somehow the rather unmemorable "Behold this little Bane-- / The Boon of all alive--" translates to "Love is a bitch named Susan Gilbert Dickinson." (1464) Bury the lede, why dontcha. Some folks may un-questioningly absorb their affair as portrayed here as a bit of newfound trivia concerning the "real" ED's biography. Ack.

But is that so different from framing her life in terms of Thomas Wentworth Higginson, or the Master, or any of the other ways scholars struggle to capture such a willfully elusive, reclusive spirit? Is it any more presumptive than pasting Dickinson's verse into a greeting card? No, I'd argue--and in fact this treatment, though perverse, carries more reverence. Legault engages us in talking about a poet he loves, and he has a wonderful sensibility for phrasing truth claims in a skeptic's landscape. The reader in me smiles at such non sequiturs such as "Light is a communist." (506). Later, "I'm a bad driver because I enjoy leaving things to chance." (1283).

The premise for The Emily Dickinson Reader is deeply clever, and I enjoyed it so much I read the whole damn thing in two sittings. Honestly, I'm a little jealous of Paul Legault for writing it--that best, strangest kind of author-to-author compliment. 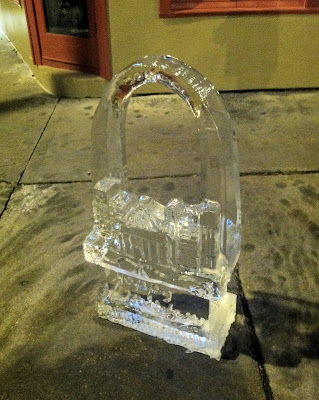 Have you gotten your hands on The Incredible Sestina Anthology yet?

Two magazines with my favorite trim size--32 Poems and Cave Wall--both have new issues hot off the presses.

I'll lead a discussion at Politics & Prose, "Inside The Best American Poetry 2013," from 1-3 PM on Thursday, January 16. Advance registration is required; could be a fun holiday gift to a poet in the family, paired with a copy of BAP 2013 and/or Denise Duhamel's Blowout, both of which we'll reference. Much of the session will be spent on real-time, close reading of some of the year's best poems (according to BAP) in terms of craft and theme. We'll also have a fun, frank discussion of how "best of" collections come to exist, how they're curated, and what a guest editor's aesthetic adds to the mix.
Posted by Sandra at 12:15 PM 1 comment: