A Minor Manifesto on Readings 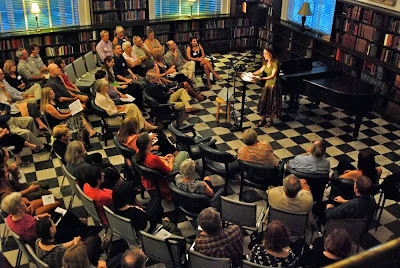 This photograph is from a wonderful evening I had with the Poetry Society of South Carolina, during a 2011 reading in Charleston. I've had a few conversations lately about literary tours, and it reminded me of a piece I wrote for SheWrites, "On Arranging Readings," as part of my 2010 "Countdown to Publication" for I Was the Jukebox. I used the same philosophies in touring to support Don't Kill the Birthday Girl. When I find myself demoralized, or a reading goes poorly (I have those nights too) it is usually because I've violated one of these tenets:

1) Don't fixate on a cross-country "book tour," or multiple stops in the same city.
2) Embrace the idea of a "book stop" in tandem with non-literary travel.
3) Reach out to friends--but forgive them if they do not help.
4) If you hope to feature in a series with an open mic, take part in the open mic some earlier week.
5) If no one shows up to your reading, it doesn't mean you're a bad writer.
6) Be prepared to be your own cashbox; carry small change.
7) For particularly young or elderly audiences, be prepared to mix in the work of famous authors.
8) Don't go past your allotted timing just because you came a long way.
9) Use your curriculum vitae as the basis to brainstorm reading venues.
10) Don't give away a copy of your book just because you want someone to host you.

If any of those seem strange, or need further explaining, check out my original post. But in thinking about my subsequent experiences, I would add this:


Take the word "favor" out of your vocabulary.

This feels counterintuitive, because we think of the poetry world as a close (some say incestuous) community that constantly trades on favors. This dictate is not meant to negate generosity. We're all doing this on limited budgets, usually volunteering our time. We do these things for pleasure, and because we're part of a social pact. And yet.

When it comes to the practical details of your event, nothing corrodes a reading experience faster than the belief that someone is doing someone a favor. If you can't approach the event in good faith and true enthusiasm, it's not gonna fly.

The guest who thinks he is favoring the series with his presence often reads too long (or occasionally, too little) and fails to engage the audience.

The host who does the author a favor by fitting her in, after the umpteenth query, tends to do a lackluster job promoting. (One thing I've learned: when I have to pound down the door of the bookstore or club, it's rarely worth it. Even a great or fabled venue is no fun, if you don't feel truly welcome or championed.)

When you're doing someone a favor, you're not acting in a professional mode. That's when the requested bio, hi-res headshot and cover art, and contact for book stock comes in at the last minute or, though sent in promptly, is never used. That's when people get frustrated because it's unclear who is processing sales, or collecting emails for the list, or where the suggested cover donation is actually going.

That's what gets to people, when their work is bargained down to nothing more than a token. Resist. Dinner or a couch to crash on; these can be favors (and hey, if you're the guest, buy your host a drink). But your reading or series--that audience, your time, your stock--these are not to be offered up as favors, or treated as such. The trick is to conserve precious resources, on both sides, while keeping one's ego in check.

I'm not saying I get the balance right all the time. But I'm trying.
Posted by Sandra at 10:43 AM