Still a TJ Kid at Heart

Have you come across the pseudo-fact, circulating recently, that claims 72% of all American adults live within 20 miles from where they grew up? I don't trust that as a statistic, but its true that the when I map the driving distance from my home in SW Washington, DC, to my family's home in Vienna, VA, the distance comes up as just 17 miles. Though I'd note that distance still takes more than a half-hour to travel thanks to Beltway traffic.

There are moments when I nourish the instinct to get away, and moments when it feels incredibly rewarding to have stayed so close to home for so long. Evidence of the latter has been a recent dialogue with Fairfax County's Public Libraries, which provided refuge on many a day growing up. Our conversation has resulted in both an hourlong "Meet the Poet" event recorded online last week (which you can view here) and an upcoming July seminar, free, on "Narrative Strategies and Truth-Telling in Nonfiction," intended for folks interested in self-mentoring themselves toward writing a memoir.

On the heels of a virtual 8th Period visit with the TJ Poets Club for National Poetry Month in April, Thomas Jefferson High School for Science and Technology asked me to speak at their graduation ceremonies. As an alumna, I couldn't imagine saying no. But as the date neared and it got really real, I wondered how I was going to use this chance--all six glimmering minutes of it.

The actual morning of ceremonies was a flustered affair, because the administration had only gotten the green light for an in-person gathering less than two months prior. My husband and I trekked out to Woodson High School in Fairfax on the first blazingly hot day of summer. A bunch of us tried to access the football field one way, then turned around and got told we would have to backtrack. I realized I didn't have a contact phone number for anyone. Seconds were ticking down to the 9 AM start time.

But somehow (after being yelled at for accidentally stepping on the track), we found our way to the incoming march of TJ faculty. I felt tremendously relieved to spot Marianne Razzino--fellow member of the Class of 1998, now mathematics teacher--who was holding a black robe and generic regalia to throw on over my dress. Next thing I knew, I was sitting on a stage facing the Class of 2021.

Here's what I had to say, opening with a few ad-libbed observations as I eased into the strangeness of the task at hand~ 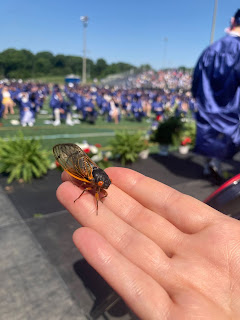 Thank you for that wonderful introduction; thank you for choosing me to be here; thank you to my own former classmate, who made the regalia sit on me. I'm really honored. I'm glad to be here at Woodson, site of many a Thomas Jefferson High School Homecoming victory, and in the company of...cicadas.

I know that you are a good, honorable group of people, because during this time I have watched multiple cicadas land on you, and you've found gentle ways to--[hand gesture]. I haven't seen a single one swatted or squished yet. I appreciate the pacifists among us.

Years ago, I actually auditioned to be the graduating speaker for the Class of 1998. I was not chosen. So I thought about digging up that old speech. Pulling it out, tearing away the dot-matrix feeder strips; if you don't know that reference, ask your parents later. But the world that we lived in, in 1998, is so different from the world we live in now.

I wanted to speak to you all as an alumna. I wanted to give you the most direct and hardest-earned knowledge that I could offer, and I'm following some amazing comments that have been made already. Forgive me that, in typical TJ fashion, I working on these comments 2 AM on the day they were due.

I’ve got five minutes and I've got three things to tell you.

First, I want to talk about a honey fungus in Eastern Oregon, Armillaria Ostoyae. I know. Stay with me. It's the largest creature on earth—it's the size of sixteen football fields—and it lives mostly underground. The bad news is this mushroom isn’t allowing the coniferous trees above to grow. But the amazing news is that parts of the organism are 8,000 years old.

Science is the language that humans use to articulate wonder and curiosity, and it is beautiful thing that every one of these students, every one of you, speaks that language of science. You can go into any number of professions—you can become lawyer, restaurant owners, even a poet—but I can guarantee that your success in whatever field you choose will be enriched by continuing to learn about the science and technology of this world. So please, always hold space for that.

Second, I know I am talking to a crowd that is expert at cramming, at acing, at burning the candle at both ends, whatever metaphor you want. I say this with love: please, now, if you aren't already, think about your mental health. Think about taking care of yourself. Build your reserves. Recognize that the You who gets a B is worth just as much as the You who gets an A.

And I love that I wrote this message to you all last night, but I've already heard it echoed today. I heard your principal say it, and I heard your classmates say it, and that tells me that you all are thinking about these things. Because I have been where you are. And, trust me, there will come a time when all-nighters are no longer an option, okay? All the caffeine in the world will not allow you to activate the way that you're able to activate right now. In addition to being brilliant, high-achieving performers, you might want to be good partners, loving parents, or simply people with lives outside your work.

You are more than your productivity. To loosely cite Voltaire—whose Candide I read in Ms. Curtis’s AP Literature class—do not let “perfect” be the enemy of good.

The third thing I want to say is that you are so fortunate in the company you have kept for these last four years, even when it was over Zoom. I move among artists, who tend to congratulate themselves for being interesting. And they are. But honestly, person-for-person, your classmates at TJ are the most interesting cohort of people you’ll ever meet, and their names will constellate the sky of every imaginable profession, every geographic location, in the years to come. So keep track. Don’t disappear on each other.

Doesn’t mean you have to say these were the best years of your life and, in fact, I hope aren’t. I hope the best is ahead of you. But trust me when I say that the bonds forged in the fires of this high school mean something.

I look out and know that I am looking at the people who will shape our world in the years to come. The great part is, I trust you with that world. I have seen so many signs that this generation is talented, adept, inclusive in your social values, generous with your spirit. I ask only that you take care of yourselves, and take care of each other. Thank you.

As the ceremony shifted into presentation of diplomas, I realized that my placement--you could draw a straight line from the photographer's camera, to the principal, to my chair--meant that I'd be photobombing graduates as they received their diplomas. Sitting and smiling through 400 names is no joke. But it wasn't hard to smile, watching their individual energies as each person cued up to cross the stage. They fussed with their tassels, they stood on tiptoe, they double-checked which hand they were supposed to extend. "Whatever feels good to you, man, just go with it," one of their faculty advisors said, clapping his hand on the back of a student.

Watching a wave of blue caps flip into the air, what I felt was gratitude. And hope. 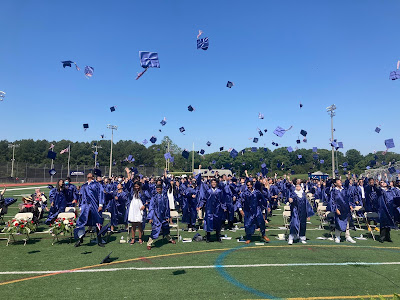 I like your blog and poetry (Card Table and Lazarus are great!). I'd like to add it to my blogroll.

We pioneer in providing research and analytical tutorial assistance to all doctoral candidates. Our highly qualified research team will assist you all throughout your thesis.