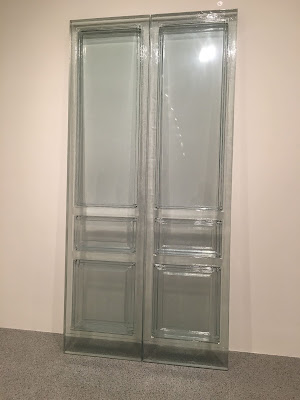 English artist Rachel Whiteread uses plaster, rubber, and resin to cast spaces we take for granted--doors and bathtubs; the inside of hot water bottles; the undersides of chairs; the cardboard spools for toilet paper. She was the first woman to win the Turner Prize, in 1993, after casting a whole house that had been scheduled for demolition. Although I've recognized her work at various museums over the years, the exhibit at the National Gallery of Art provides a whole new level of breadth and context. If you come to DC between now and January 2019, be sure and visit. 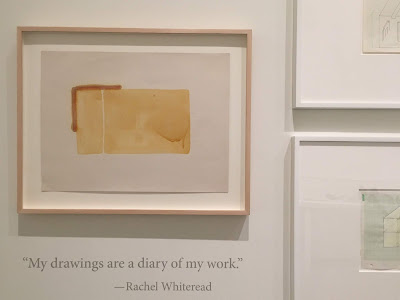 I've been waking up with my jaw already clenched, too many days in a row, in dread of each day's news. Sometimes fantastic things happen--the MacArthur "genius" grant recipients for this year include Natalie Diaz and Kelly Link--and sometimes someone shows me a video of a basket of baby sloths or a baby flamingo taking its first steps, and sometimes it's just enough to be in the same space as a friend, laughing. Sometimes solace lasts for the length of a poem. But all is a bulwark against the sense that our checks and balances no longer operate as they should. Perhaps they never did. The calls of "Remember on November 6!" ring a bit hollow when you're a resident of Washington, D.C.--almost 700,000 of us, and not one seat in the Senate. Imagine how differently the last few weeks might have gone, had we had voting representation.

Teju Cole visited American University this past week. My undergraduate students for "Writers in Print and Person" read Blind Spot, photographs juxtaposed with flash nonfiction texts. The book is physically gorgeous as an artifact and gave us means to discuss Roland Barthes' Camera Lucida, "studium" and "punctum." Barthes developed this vocabulary to talk primarily about portraiture; in moving the approach to landscape photography, which Cole does--and largely devoid of people's faces--I'd argue that the explicit text teases a "punctum" to the surface that would otherwise stay invisible, but inherent to the impulse of the photographer. His lecture did the thing great art does, selfishly, which was that it made me want to hole up and think and write. 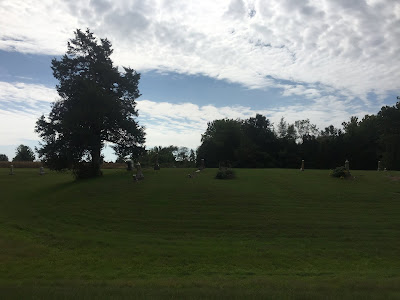 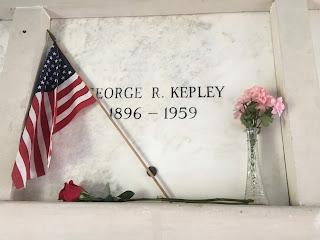 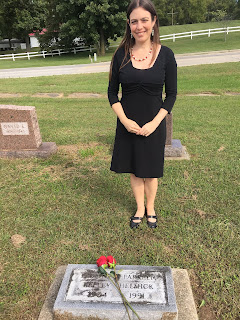 Photographs had already been on my mind the weekend before, when my sister and I drove to Kinmundy, Illinois, for my grandmother's memorial service. We went to Evergreen Cemetery, walked through one of my grandfather's childhood homes, had lunch at the Methodist church, and looked through the historical society's archives of photographs and newspapers. We stayed in Salem, the closest nearby town with a hotel. The Pruetts are prevalent in the history of Kinmundy's thriving days, though my grandmother, seems important to note, was a Kepley by birth. We took a couple of hours to drive to nearby Louisville, searching out the cemetery where her parents were buried. However many years ago, it was probably my grandmother's hand that tipped the American flag within the framing of her father's mausoleum plot. Widowed early, remarried, my great-grandmother (and namesake) was laid to rest with her family, the Farrells. We left the last of the morning's red roses with their graves. Since the high school's homecoming weekend had crowded most of the restaurants that night, we went to the parking-lot Denny's for dinner. I ordered a bourbon-chicken-vegetable skillet thing and watched a table of teenage girls fuss with their corsages and sparkly dresses.

The photograph I want is the one I don't have: a shot from behind of my mother, sitting in line with her brother and sister, facing the arrangement of my grandmother's ashes prior to the beginning of the service, and beyond them the cornfields that line the cemetery. We sat two rows behind and I thought I should capture this moment, these three siblings, but then I wasn't sure about camera etiquette at a funeral. Family sat down in the row between us and the moment was gone. I captured the moment after instead, as my aunt stood to face us and speak. Maybe Roland Barthes would say that the true punctum is in this second image, this motion, imperfect as it may be. 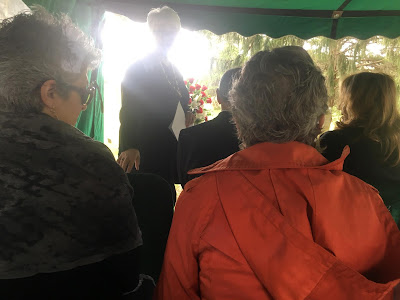 After examine a few of the weblog posts on your website now, and I truly like your means of blogging. I bookmarked it to my bookmark web site list and will be checking back soon. Pls take a look at my website as nicely and let me know what you think. gsn casino slots

You need to take part in a contest for probably the greatest blogs on the web. I'll advocate this web site! online casinos for us players