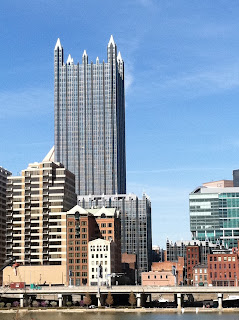 This week I return to Pittsburgh, one of my favorite towns. The first time I drove here I did not know what to expect--bare steel and depressing concrete, perhaps--so I was shocked by the verdant hills, graceful bridges (more than Venice, so goes the rumor), and the bright iron colors that accent rather than constrain the landscape. This is the Pittsburgh Plate Glass Building, a.k.a a modern castle. Magic. And it's not just the place, it is the people: there is a real underdog enthusiasm here when it comes to the arts scene. Last night I gave a reading as part of the Point Park University Poetry Series to 111 people. Afterwards at least a dozen students lined up, books in hand, to share their dreams of becoming writers. It takes your breath away. 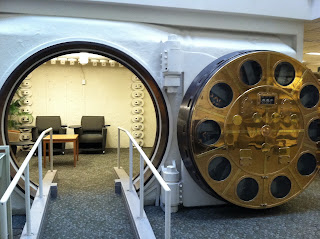 The Point Park University "campus" makes a space for itself by reclaiming buildings originally dedicated for other purposes. It is very vertical, very dense. My reading took place in an auditorium of a former hotel that also houses academic offices, classrooms, and student housing. My master class took place in an old bank that has been turned into a library--including this reading room fashioned from the vault. 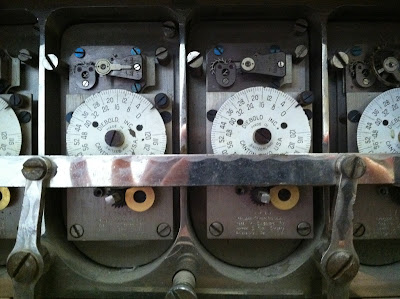 Our master class was on the sestina, so a close-up of the vault's combination lock feels apropos. We looked at examples from Philip Sidney, Elizabeth Bishop, Miller Williams, and Sonya Huber. The students were totally tuned in--it was a lot of fun--and I think (I hope) that we banished the bum rap that the sestina is an inherently inorganic, forced form of writing. For certain topics and certain voices, the turn of those endwords serves a vital purpose. You just gotta get the tumblers lined up right.

Before my reading I went to the Gandy Dancer Saloon for a gimlet and their "Buck a Shuck" happy hour. The Saloon is part of the Grand Concourse, which opened in 1978 but looks a century older (the building was built in 1900 to house the Pittsburgh Terminal Train Station). I had John Jeremiah Sullivan's Pulphead, and for an hour I enjoyed that rarest of pleasures: reading on the road. Sullivan is an interesting and higly self-aware essayist; I was unexpectedly moved by his meditation on Michael Jackson, of all people.


The poet who brought me here is Sarah Perrier, the author of Nothing Fatal, and afterwards I joined her and fiction professor Karen Dwyer for a meal at Salt of the Earth. (Mmmm. How did I go this long without knowing the wonder of "duck ham"?) One of my favorite parts of book tour is meeting the faculty at these schools, so have often put in hours of works to fight for the creative writing programs that their undergrads crave. Both women are forceful, smart, and funny, with a legion of devoted students. Point Park is lucky to have them. 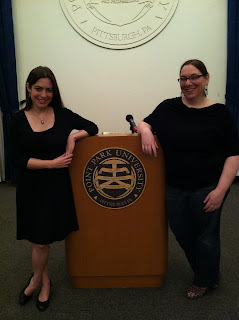 From here I journey to New York state for the Alfred Literary Festival. I'm excited to give the kick-off reading on Thursday afternoon--and to hang out with Juliana Gray, an incredibly talented poet and the author of Roleplay, the forthcoming winner of the Orphic Book Prize from Dream Horse Press. I first met Juliana the Sewanee Writer's Conference, and (ahem) her drinking ability rivals my own. There will be hijinks. I'll be reading alongside Ed Falco, a novelist who heads up the MFA program at Virginia Tech and is carrying on the story of the Corleone family with a prequel to Mario Puzo's The Godfather, which is coming out in May. When I first met Ed at AWP this year, he was wearing a leather jacket. In otherwords: double the hijinks. Onwards~ 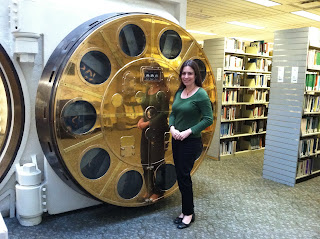 (As I sing the praises of Pittsburgh, I can hear a horrific thunderstorm come on. All right, city, I get it! Something has to happen to make those hills so emerald green....)
Posted by Sandra at 11:35 AM

ah, this post makes me miss my hometown! I'm so glad to hear that your reading was so well attended. Way to go Pittsburgh! I met Sarah Perrier at AWP in D.C. Such a small poetry world.

I also love the PPG building. I always tell people that my grandpa helped install the elevators.