People That Make Me Happy in This Burgeoning Springtime...

-The well-dressed man quick-stepping down a Dupont Circle sidewalk with his arms full of roses and lilies in a vase, holding his spine ram-rod straight to be sure his tie stayed dry.

-My parents as they shared warm olives (sprinkled in fennel seed and lemon zest) with me in Charlottesville--where they had come to see me read at the Festival of the Book.

-My sister zooming up, down, and around Route 29 in her new red Mustang for her first Spring Break road trip.

-The guy who sells apple butter at the Farmer's Market, with plenty of saltines out for a free taste.

I'll spend another minute with that last one.

Ethelbert has one of the biggest smiles in town. He remembers your name, and has three people he wants to introduce you to. He builds this community with his bare hands. He makes time to have coffee--even though he doesn't drink coffee. He is a moving poet and a persuasive reader. An introduction by Ethelbert leaves the featured writer weak-kneed. He is shamelessly graceful and gracefully shameless. He has mastered the look of a sweater over a collared shirt. He befriends across all stylistic and social divisions. He has a deep and root-rambled undertanding of Washington's cultural history. His words are inscribed in stone outside the Dupont Circle metro. He tells you when you need to get your eyes checked (literally) and your head checked (less literally). He inspires me to not just be a poet, but to be a DC poet. He hand-annotates the Washington Post every morning. He speaks truth to powerful people.

I really just adore the man. 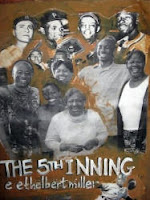 In his latest book, The Fifth Inning, Ethelbert uses baseball as a framing device to explore personal stories. You can hear his NPR interview on the process of writing memoir here.

Those in the DC area may have noticed that this Wednesday (March 25) is a juggernaut night for writers--four major readings. Here's the lineup:

Time to perfect that magic potion that allows me to inhabit multiple geographies at once...
Posted by Sandra at 1:54 PM

sorry I missed your reading Saturday in Charlottesville, but work interferred with my plans-

I'll see you again one of these days!!