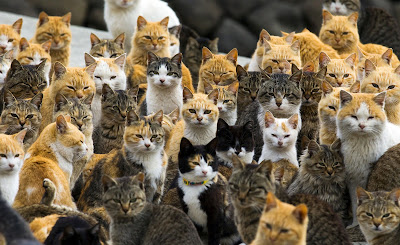 One month exactly after losing our cat, Whisky, I had a good if tiring Tuesday that culminated in leading the MFA poetry workshop at American University. Many folks were absent--it's that time of the semester--so we let out a little early, which meant that I spontaneously offered to pick up dinner from 2Amys, which meant that my car found itself crawling along Macomb Street right as the services from Washington Hebrew Congregation let out.

I didn't want to process what I could see in front of me. Squirrel? Must be a squirrel. But a woman coming in the opposite direction stopped her car in the road and hopped out. Bless her for breaking the spell. "This is someone's kitty," she said, scooping up the gray cat and moving it to the sidewalk. She had what might have been a young son in the passenger seat, wide-eyed, so after that she kept going.

At the next intersection, I flagged down a police officer and asked him to go check. I told him the cat might still be alive, and he nodded noncommittally. After I parked I walked back, wondering, and of course there the creature was alone, still and untended, as passersby from the services streamed past along the pavement.

So I knocked on doors. And I rang bells. And I crossed the street, back and forth, looking for someone--anyone--who might answer and know this cat. I couldn't bear the thought of someone emerging the next morning to find the cat there or, worse, animal control coming by and taking the body before anyone knew what had happened.

Eventually, a woman come to the door of the smallest house, the one the cat had been closest to, the one that had a small bowl for kibble on the front step. This was my third try and I was about to give up. Apparently her ringer had never sounded inside, but she'd spotted the lavender of my dress. The moment I even began to speak, she knew. She cried, "Dusty!" The cat had been with her for twenty years.

Her grief is her grief, and it's not mine to display here. But I was grateful to be there with her, in the moment, to help as we took care of things; to feel the cat's light heft in my hands as it was curled into a bed bought not that long ago.

Because this is what humans do, I still went and got the damn pizza, the roasted peppers and anchovies, the rapini. In the moment I had no appetite, but I knew that I would later. I was glad no one asked about my red, swollen eyes.

The next night was another class at American University. I wanted to choose something that dealt with grief, but not of an articulated sort. Undergraduates are just finding their way to naming what makes them feel the way they feel--and you have to be careful not to force it on them. So I reached for this beautiful if puzzling (for some) poem from Kaveh Akbar, "Orchids Are Sprouting From the Floorboards"~

Orchids Are Sprouting From the Floorboards

Orchids are sprouting from the floorboards.

Orchids are gushing out from the faucets.

The cat mews orchids from his mouth.

His whiskers are also orchids.

The grass is sprouting orchids.

It is becoming mostly orchids.

The trees are filled with orchids.

The tire swing is twirling with orchids.

The sunlight on the wet cement is a white orchid.

The car tires leave a trail of orchids.

A bouquet of orchids lifts from its tailpipe.

Teenagers are texting each other pictures

of orchids on their phones, which are also orchids.

to feed their infants, who are orchids themselves.

Their coos are a kind of orchid.

The clouds are all orchids.

They are raining orchids.

The walls are all orchids,

the teapot is an orchid,

the blank easel is an orchid

and this cold is an orchid. Oh,

Lydia, we miss you terribly.

I often use this poem to talk about contemporary poetry's value on parallel structure, anaphora, and excess. The reaction tends to be polarized--some readers love it, others really resist it. In particular I always enjoy the telescoping of those penultimate lines, as the poem's "camera" seems to zoom in on a particular room and a particular speaker (one with a cold). I was delighted that this time the students found their way organically to thinking of how funerals are often the cause for a profusion of flowers.

Since I didn't want to create an utterly morose atmosphere, I found another way to think about excess: Neko Atsume, the Japanese mobile game of cat collecting. There's a calming quality to cats en masse, even though on another level it's creepy; this resonates with anyone who has been to an island where the feral cat population has surged. I offered a few screenshots toying with the game's premise and outcomes. 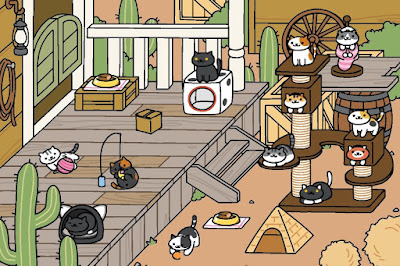 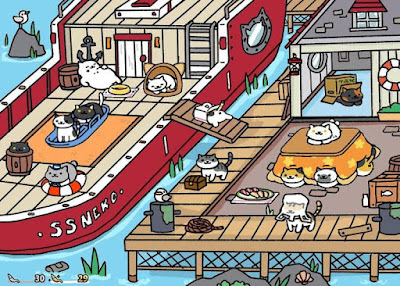 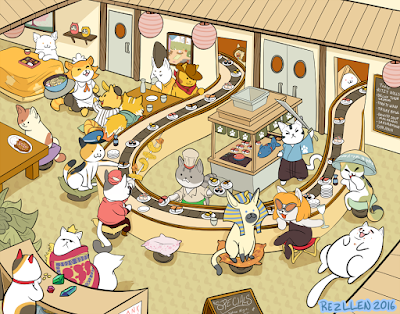 ...goofy, for sure, but poetry thrives alongside goofy. I was mostly trying not to cry.
Posted by Sandra at 2:19 PM

This is one of my absolute favorite poems by Kaveh Akbar! Thank you for sharing it here, along with your experience with the cat. I really appreciate your blog and look forward to new posts!