As a teenager, I played SimCity. Obsessively. I went to a high school for science and technology. I used to look for any excuse to design a flyer; I built my own website (and have rebuilt it three times over). In other words, there is a part of me that relishes hours spent quietly tinkering in front a computer screen. The first time I made videopoems, I did so as a way of burning off creative energy--nervousness, really-- while I waited for I Was the Jukebox to come into the world.

I had never worked in iMovie before, so I made a few rookie errors. For example, you'll find two different versions of my video for "Vocation" on YouTube (one ideal for blog display, one widescreen), which means I accidentally split my hit count. My image resolution is not quite up to snuff, and the audio is tinny at times. But I'll never forget the first time I watched as a high-school teacher cued up the video for "I Don't Fear Death" while students took their seats, and realized This is a way in.

Not every student dives into a poem based on the words alone. Some get frustrated when they're reading to themselves and get to a word they can't pronounce. Some need the stimulation of images, the pacing of music. Some immediately turn their thoughts about how they'd illustrate one of their poems and, frankly, how it would be way better than what you've done. I'll take it. I'll take anything that gets them engaged.

In one week--on December 13--the paperback edition of Count the Waves makes its debut in the world. I feel so fortunate to have a hardback run as part of working with W. W. Norton. But the truth is, the affordable paperback is what makes it onto a syllabus and into a classroom. I love these poems, and as I've written about here before, I feel strongly that the best way to ensure a poem's survival is to teach it to the next generation of readers and writers. So, what can I do for this book?

I can remind people that there are six sestinas, including the title poem, with varying degrees of play in their endwords and lineation, which makes the collection a great way to consider the tradition and flexibility of that form.

I can be available to Skype with your students (I am!) or do Q&A over email (I am!).

I can point out that Count the Waves is in dialogue with the new anthology The Traveler's Vade Mecum, edited by Helen Klein Ross. The long story short is that my engagement with the series began in response to her solicitation. I just happened to keep writing TVM poems, ultimately two dozen in all.

So if students were to go back to the original 1853 compendium by A.C. Baldwin (the complete text of which can be found online), pick a phrase, and write a "Traveler's Vade Mecum" poem of their own, they'd be conversing not only with me but with Frank Bidart, Billy Collins, Huang Fan, Denise Duhamel, Hailey Leithauser, Dan Vera, Ann Fisher-Wirth, and a bunch of others.

I can keep paying it forward--promoting the new and forthcoming books I love by others--because I believe that to give to a community is to get a community.

And I can make videopoems.

Returning to the realms of iMovie, I found that there were many more ways to tweak and enhance the performance. Fingers crossed that makes for better videos, though I'll let you be the judge. Exporting to YouTube or Vimeo is significantly easier; "processing," which used to take hours, now takes minutes.

Istockphoto.com was boughtby Getty, which is a bummer because the pricing is much more aggressive, and some of the quirkier contributions have been pared from the collection. On the other hand, the quality control is much better. I just had to get clever about making my purchases as efficient as possible, and looking elsewhere for free images. I also took advantage of some neat new transition effects embedded into iMovie.

Kevin MacLeod is still my personal hero when it comes to offering royalty-free music. But his Incompetech can be a little maddening to navigate. I was thrilled to see that he has upgraded to taking part in a spiffier website, Free Music Archive, which offers an incredible variety of options categorized by genre and searchable in terms of length.

I keep my videos short, under two minutes, but that's just a personal preference. Also, I feel strongly that the best results come when you can find a piece of music whose length genuinely matches your voiceover, versus cropping something down. There's a magic to how the crescendos and shifts in pacing--of an artwork created independently of your poem--can accent the turns in the text. (Somewhere in there lies a theory of the organic volta.)

I still do a lot of fussing. I still worry they're not perfect. But here they are. Note that the screenshots are just that; the active links to YouTube are below each image. 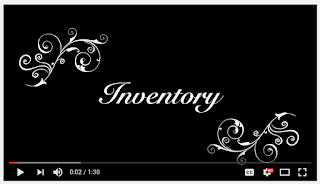 OR watch "Inventory on Vimeo if you prefer 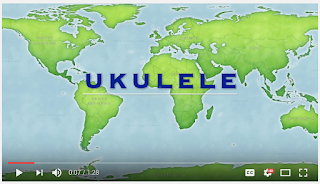 OR watch "Ukulele" on Vimeo if you prefer 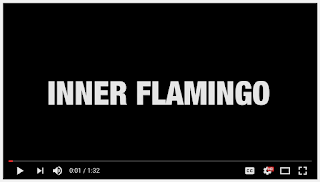 OR watch "Inner Flamingo" on Vimeo if you prefer

Video poetry has a spectrum of aesthetics. Other examples that you might enjoy...

"Project Faultless," by Jason Gray
Jason got me excited about making videopoems again, including commiserating on how to source images and introducing me to Unsplash.com.
Check out his other video, "Twilight."

Kickingwind Films, a whole archive of videopoems by Kate Greenstreet
For many of us, Kate is the original inspiration point. I love the intimacy of these.

"from Orchards," based on the Rilke poem, by Marilyn McCabe
The doubling format of text and audio allows McCabe to enact the translation process.

"Omelet," based on the poem by Fiona Tinwei Lam
The illustrations for this are fluid and wonderful. This deserves a LOT more views.

"The Air's Home," by Joanna Fuhrmann and Toni Simon
This is another tribute to the power of original art created for a video.

"Telegenic," based on the poem by Erica Goss
In this case, the custom-composed music is particularly compelling.

"Dictionary Illustrations," by Marie Craven, based on a poem by Sarah Sloat
Did you know there were prizes for videopoems? This one won the O'Bheal International Poetry Film Competition at IndieCork Festival, Ireland, 2016.

"The Secret of Secrets' Poems," by Sharanya Manivannan
Sometimes simple is best: the poet addressing the camera, sharing a bit of cultural context or a story behind the poem. A perfect option if you're working with an iPhone.

"My Ray," by Mary Meriam
...And sometimes, a poem can represent the contributions of an entire community.

"The Mouse in Me" by Stephanie Schlaifer
The creation of the poem's text, "letterpress in salt," becomes the activating image.

"Music for a Wedding"based on poems by Galen Beebe and Lauren Clark
This is technically the record of a live production that included performance of Baroque music; it shows how powerful layering multiple levels of sensory information can be.

The Cincinnati Review posts videos to their YouTube channel every Tuesday and Friday
The example in the link is "The Giraffes at the Lincoln Park Zoo," by Anna Leahy

Helen: A Literary Magazine curates an ongoing series of "video exclusives"
The example in the link is "Wonder Woman Dreams of the Amazon" by Jeannine Hall Gailey

Motionpoems, the Minneapolis nonprofit founded by poet Todd Boss, creates high-quality short films by working with outside production teams. In recent years they have taken to collaborating with another organization  (such as Cave Canem, or VIDA) for a "season" of videos at a time. A few favorites:

"How Do You Raise a Black Child," based on the poem by Cortney Lamar Charleston

"Things I Carry Into the World," based on the poem by Cynthia Manick

"The Robots Are Coming," based on the poem by Kyle Dargan

"The Mother Warns the Tornado," based on the poem by Catherine Pierce

"The Long Deployment," based on the poem by Jehanne Dubrow

"Crows, Reckoning" based on the poem by Jessica Goodfellow

"Triolet for Laika, First Dog in Space," based on the poem by Ann Eichler Kolakowski

The best singular index of what is out there can be found at Moving Poems, which Dave Bonta and a team of collaborators has put years of work into developing, maintaining, and updating. The alphabetical roster of poets with videopoems is particularly great if you're shaping a syllabus and you want to incorporate visual elements. You can suggest additions to the archive (yourself or someone else) here.

In other words, there's a lot of people out there who can talk to your students about making videopoems. But if you end up sharing my work with them, let me know! I'd be happy to talk through my thoughts on the process.

There are also writers who have created ongoing series of video-essays that integrate audio and film elements, are variations on "intermedia," or document staged and performance art, all as a substantial component of their artistic work--Jillian Weise's side persona as Tipsy Sullivan, Kenzie Allen, and Karrie Higgins all come to mind--as well as the Southern Spaces "Poets in Place" series, which documents poets reading their work in settings that inspired them. Those writers deserve their own discussion for another day, but check out the links in the meantime.

Hi, I hope you can check out my site.

I also write different instrument review and other musical information like understanding musical notes. Hope this helps you!