This is the third October that I have traveled to Mississippi, and (for better and for worse) the occasion of least internet access. A few glimpses of what I saw: 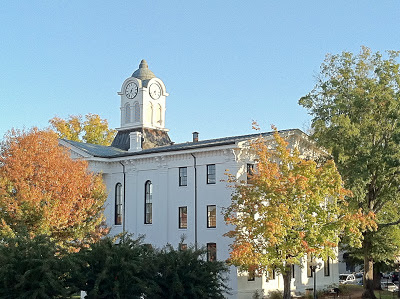 Oxford is as it always is...wonderful, and welcoming. Within the first few moments of being in town I bumped into Charlie walking outside Proud Larry's (where he was playing that night), Ron hollered down a hello from Square Books' balcony, and Chico drove by--with his dog Ringo hanging out the passenger side window--and said "Welcome home!" We ate smoked catfish salad at Ajax, caught  Thacker Mountain, had a second dinner of oysters at Snackbar, and had one helluva time.

Because it was the weekend of the big game versus Auburn ( = drunk Ole Miss craziness = no hotel rooms) we trekked out to Memphis and, ultimately, the Shack-Up Inn for the weekend. The inn is outside Clarksdale, cotton country, and consists of an aggregation of buildings that includes refurbished sharecropper shacks, a cotton gin, seed houses, and other outbuildings. Lots of corrugated tin and cypress wood. We were just a few miles down the road from the Crossroads of Highway 49 and Highway 61, where Robert Johnson supposedly sold his soul to the devil in return for his guitar skills. I don't know about that, but the BBQ ribs and beans cooked by Abe's, at the base of the crossroads, were definitely soul-worthy. 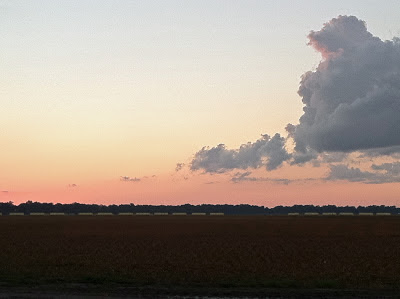 Cotton truly is the name of the game here. Those are great rolls of it, off in the distance, wrapped tight in chartreuse shrinkwrap. Fluffs of it tumble down the road as you drive. 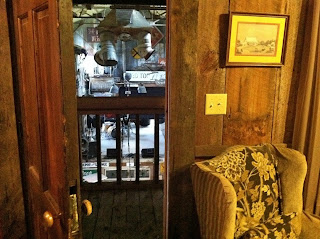 We ate those ribs while lazing our way through a Sunday on the balcony of our Sky Shack, a room that overlooks the inn's central Juke Joint Chapel. 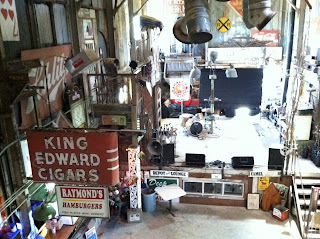 Office, pantry, sometimes music venue--but we had it to ourselves after dark. 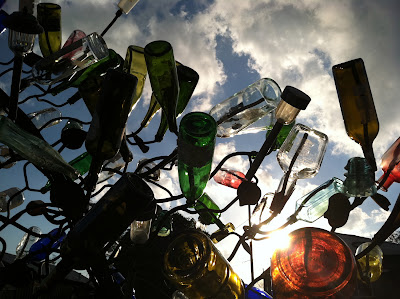 One of many bottle trees dotting the grounds, as ubiquitous as kudzu in Mississippi. From Hill Country to Jackson, Starkville, Atlanta...as we made our way east, we watched the landscape shift in tone. By the time we got to the Virginia Museum of Fine Arts in Richmond, we were talking a very different type of glass: Dale Chihuly. 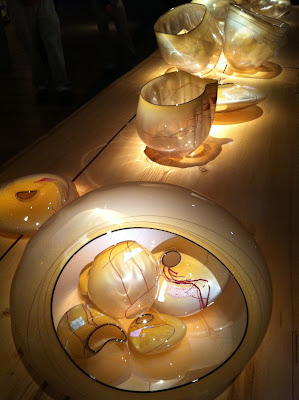 My absolute favorites were these basket-forms, which were displayed alongside the artist's collection of rugs and other woven textiles. But I could also appreciate the epic quality of the site-specific "Mille Fiori," an installation that echoed an underwater sea garden and included a wicked ghost stingray: 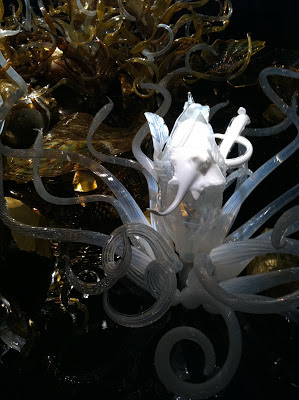 Really, you can't go wrong with a good stingray. 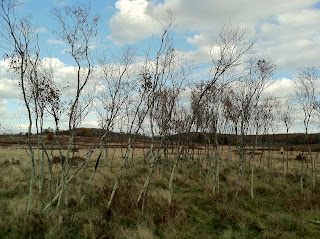 We made our way home via Skyline Drive, staying at the Skyland Resort before wandering all the way up to Front Royal. The temperature was a good 30 degrees lower than down south.  On went the socks, on went the coats. We listened to bluegrass instead of blues (with a little Django Reinhardt that I'd picked up in Atlanta mixed in for good measure). Instead of BBQ-dusted potato chips, we snacked on honey-roasted peanuts. We chose darker beers instead of Red Stripe, the red wine over the white. Instead of cotton, my eye was drawn to the orange leaves like handfuls of flame. 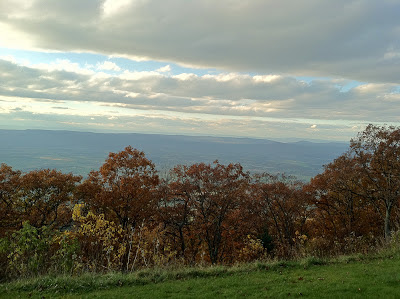 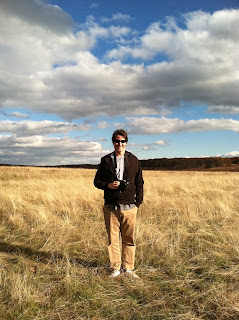 We visited 10 towns in 12 days. We went to a party at Rowan Oak, lawn strung with lights and oysters shucked on the spot. We toured Sun Studio. We watched a possum romp through Red's juke joint. We talked with writers, artists, musicians, teachers, awesome new-business owners, and a guy who lives half his year in a kayak on the river. I saw beloved friends & people I will surely never see again. The crazy thing about traveling in October is that you feel as if you come home to a different season. But after a summer of going to ground, regrouping, I'm ready for it. I'm ready for change. That so much of this narrative uses a "we" instead of the usual "I"? Part of the change.

PS ~ The really good photos are on this boy's fancy camera.
Posted by Sandra at 1:42 PM

October is always a good time to be on the road and watching the colors change in different places at different times. In Maryland they are peaking. In Maine they are mostly gone.